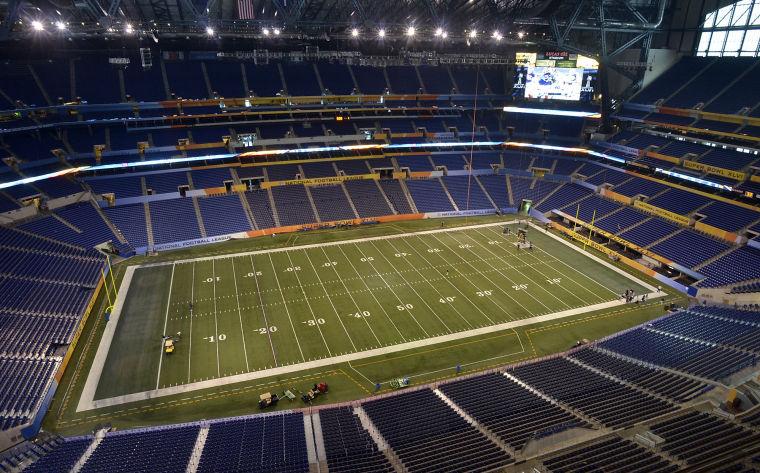 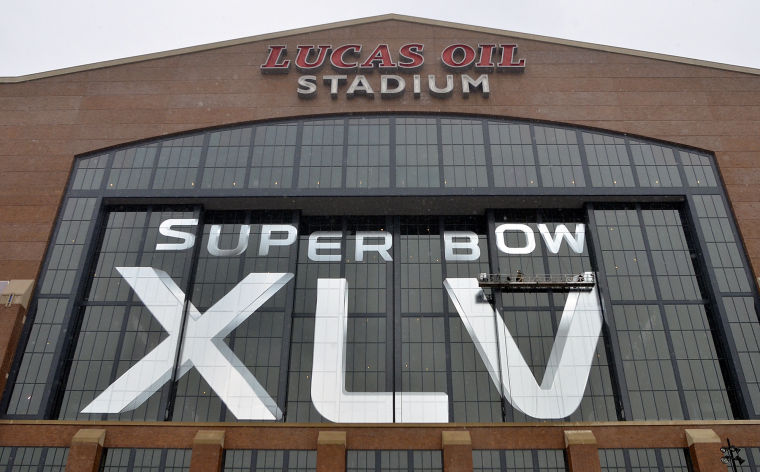 A crew finishes attaching the "V" in the Roman numeral XLVI on Lucas Oil Stadium in preparation for Super Bowl XLVI. 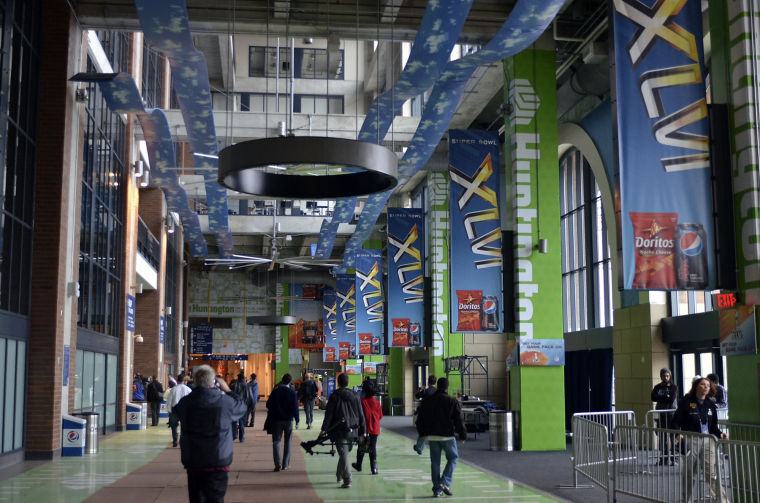 Members of the media walk through one of the hallways at Lucas Oil Stadium Wednesday during a tour of the facility that is being prepared for Super Bowl XLVI in Indianapolis. (Photo by Joseph C. Garza/Tribune-Star)

A crew finishes attaching the "V" in the Roman numeral XLVI on Lucas Oil Stadium in preparation for Super Bowl XLVI.

Members of the media walk through one of the hallways at Lucas Oil Stadium Wednesday during a tour of the facility that is being prepared for Super Bowl XLVI in Indianapolis. (Photo by Joseph C. Garza/Tribune-Star)

Inside a private entrance to Lucas Oil Stadium is a poster taped to a window, bearing a large-lettered message: "Fans First!"

It's become the mantra for NFL Super Bowl executives who've vowed not to repeat in Indianapolis the Dallas debacle of a year ago.

Compelled by public shame – and a lawsuit – they've adopted a new Super Bowl initiative aimed at enchanting fans who are spending a small fortune on what those NFL executives call the "greatest sports event in the world."

And they turned to Disney to help them do it.

"We know we didn't do a tremendous job last year," said Frank Supovitz, NFL senior vice president for events. "We want this year's experience to be world-class."

During a recent media tour of the $720 million Lucas Oil Stadium, Supovitz spoke at length about what he described as the "postmortem" examination of last year's Super Bowl and the charm offensive the NFL has launched this year.

The NFL is still embarrassed by the seating scandal at Cowboys Stadium last Super Sunday: More than 3,000 fans arrived at the stadium only to be told their temporary seats were still under construction or too dangerous to be occupied.

Most seat-less fans ended up with a spot to see the game, plus cash payments and free tickets to this year's Super Bowl game. But some went home angry enough to file a lawsuit against the NFL.

But "that wasn't the only problem," Supovitz said.

The host city was caught off-guard by a nasty week of winter weather that paralyzed traffic. Snow falling from the stadium roof shut down 4 of the 10 entrances on game day. The NFL had no way to direct fans to other entrances, so some waited two hours in line just to get in. Some out-of-town fans went back home, postgame, griping about their lousy experience.

So the NFL turned to the crowd-pleasing specialists at the Disney Institute for help, Supovitz said. This year, some 20,000 game-day workers – from bus drivers to NFL executives – have been trained in the Disney way of hospitality and crowd management.

Lucas Oil Stadium isn't exactly the Magic Kingdom. But the NFL is doing its best to inject a little more fantasy into the fan experience.

Despite massive security measures that have to be put into place before game day, the NFL is encouraging fans to take a Super Bowl-makeover tour of the stadium.

Tour tickets, priced from $15 to $30, will get fans access to a place where the public has never been allowed: The locker room and showers of the Indianapolis Colts. On Super Bowl game day, it will be the locker room of the Colts’ arch rival, the New England Patriots.

Fans can also plunk down $25 for a pass into media day on Jan. 31. That buys them a seat in the stadium stands to watch a media circus as some 5,000 credentialed reporters pester Super Bowl players and coaches for interviews. It's the first time that Super Bowl media day has been open to the public.

Lucas Oil Stadium is dwarfed by the 100,000-plus seat Cowboys Stadium. But the NFL decided that size doesn't matter much this year. The NFL has pushed Lucas Oil stadium's capacity from 63,000 to 68,000, but only 254 of that is in temporary seating. The rest will come from filling up the large luxury suites and packing the media into overflow press boxes.

The NFL is also beefing up its two-way communication system for stadium workers, so they can execute a quick response to a crisis, large or small. And they've added an additional 500 customer-service specialists, in and around the stadium, supplementing the 4,000-plus "street team" volunteers supplied by the Indianapolis Super Bowl Host Committee.

Indianapolis is more winter-ready than Dallas. Lucas Oil Stadium is within walking distance of 18,500 hotel rooms and a multitude of bars, restaurants and party venues in downtown Indianapolis. And the NFL has set up massive, heated tents outside the stadium, connected to the city's convention center where fans will be funneled for security screening before they enter the stadium.

"What we learned last year is that we need to be all about the fans," Supovitz said. "If they don't leave the Super Bowl feeling good about their experience, we haven't done our job."

Maureen Hayden is the CNHI Indiana state reporter. Contact her at maureen.hayden@indianamediagroup.com.

Funeral service for Edna Gay Blevins, 103, of Verden, OK will be held at 1:00pm, Saturday, December 5, 2020 at the Pentecostal Lighthouse Church in Verden, OK. Rev. Ed Whitley will officiate. Edna was born the daughter of Jerome and Anna Melot on October 7, 1917 in Wanette, OK on the former …