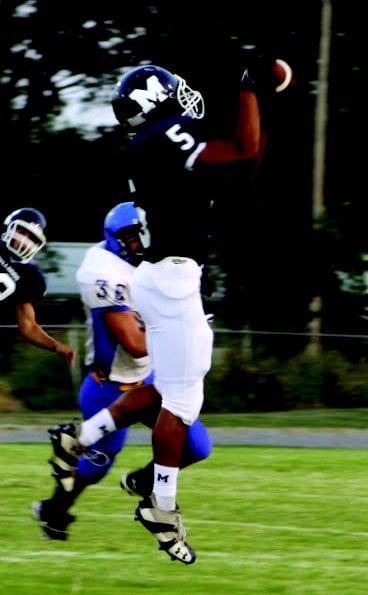 Minco's Jacob Smart catches a pass in last week's game against Dibble. The Bulldogs have a big game tonight against Wayne. 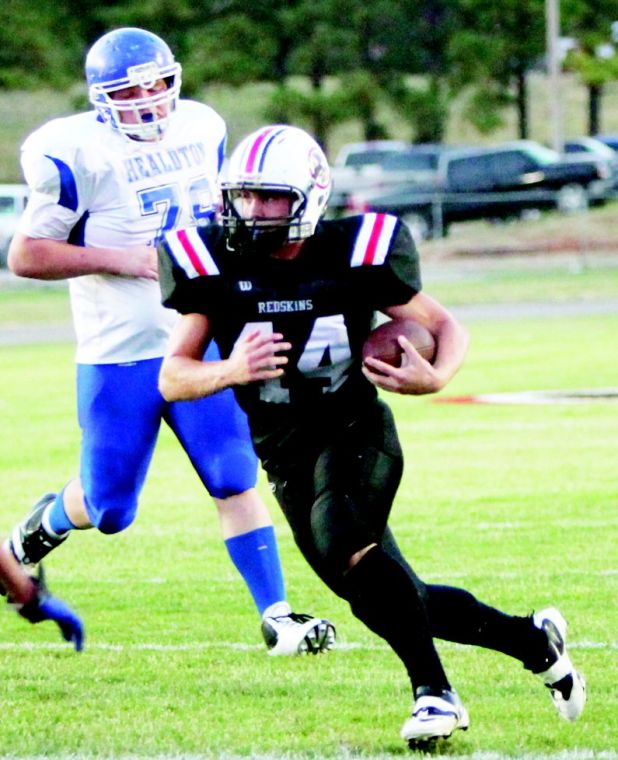 Rush Springs' Colt Beard carries the ball on a rush in last week's game against Healdton. The Redskins go to Apache tonight.

Minco's Jacob Smart catches a pass in last week's game against Dibble. The Bulldogs have a big game tonight against Wayne.

Rush Springs' Colt Beard carries the ball on a rush in last week's game against Healdton. The Redskins go to Apache tonight.

Minco will need to raise its level of intensity tonight. It face a bigger task this week since with Top 10 foe coming to town.

Minco is ranked 14th, but there are publications who have the school ranked in the top 10. CoachesAid has Wayne ranked as high as No. 3.

The other Bulldogs are coming off a 39-8 rout of Konawa.

"Its big challenge for us," Minco coach Clint Warren said. "It's not big in the sense that we're playing for a district title, but it's good to have a game with this kind of this caliber early in the year. It's important for us later down the road."

Dakota Bare (6-1, 175), a senior linebacker, impacted the Minco defense last week against Dibble with 11 tackles. One was for loss of yardage.

Performances such as that will be needed against a Wayne team that has a strong rushing attack, led by Josh Way (5-10, 175). Way carried a large load with 1,762 yards and 22 touchdowns last season, but other running backs are just as dangerous.

"Their running game has as many as five different running backs who can carry the ball and they are all pretty good," Warren said. "And their quarterback is pretty good too. That's their strength, but they also throw the ball well and accurately."

More big performances will be needed from the Minco offense.

In a 40-14 win last week against Dibble, Cade Baade completed 72 percent of his passes, throwing for 220 yards on 13 completions out of 18 pass attempts and threw one touchdown. Steven Whalen impacted the team on the receiving end with seven catches for 99 yards, one yard short of the century mark and Jacob Smart rushed for 124 yards on 14 carries with five touchdowns.

Warren and his team have been working on special teams this week in practice after yielding a kickoff return and missing two extra points.

Like any other game, Minco must avoid turning the ball over. It did twice on fumbles last week against Dibble.

"Just like in any game when two teams are evenly matched. It will come down to turnovers," Warren said.

It was not a opener to remember last week for the Longhorns as they suffered a 72-26 loss to Temple.

Alex only trailed 28-20 in wailed first period, but it was all Tigers from there.

"We had a good game plan, but we just did no execute," coach Matt Brand said.

"We just went to back to old habits and you can't do that in a big game."

They will be looking for their first win when they host Cyril tonight. But the Pirates won't be easy. They will be entering the game off the heels of a 42-0 win at Cement.

"They run the ball well," Alex coach Matt Brand said. "They're going to come in and run misdirection and option. They are aggressive on both sides of the ball. Their line is stout. They are a pressure team and blitz a lot. They are disciplined."

While the Redskins were big winners in opening week, their opponent for week 2, Apache was not.

The Warriors were derailed 37-0 by Washington. But that doesn't mean they're a team to be taken lightly. For one, Rush Springs escaped them in a narrow 9-6 win in overtime in last year's game. It took a field goal to win that game.

The Warriors are led by their quarterback who has protection from a line.

"They're big up front," Rush Springs coach Tim Beard said. "Their quarterback is areal good player. They're relying on him because they have gone to a pread offense.

"We're going to have to play good defense," Beard said. "We got to be in the right spot. Everybody has got to do their job."

Avoiding turnovers will also be important.

The Redskins will have momentum on their side after a 40-6 win against Healdton.

"It was big," Breard said. "We really warned to start the season off playing at home and getting a big win."

"Our kids played and executed well," Beard said. "We had everything geared toward s the home opener."

Beard said the Redskins have the most speed he has seen in his tenure. They will need performances such as that of Weston Depriest, who rushed for 124 yards on 14 carries, along with four TD last week.

The Tigers hope to have repeat performances from some key offensive weapons against the rival Racers, who enter the game off a 14-13 win over Pauls Valley.

Bridge Creek lost 39-28 at Elgin and continues its road swing with a trip to Bethel, a community southwest of Shawnee. The Wildcats were 30-17 winners last week at McLoud.

Number of the Week

The number 14 was a lucky one for Minco's Jacob Smart and Rush Springs' Weston Depriest, as each produced that number of carries in 100-yard games last week.