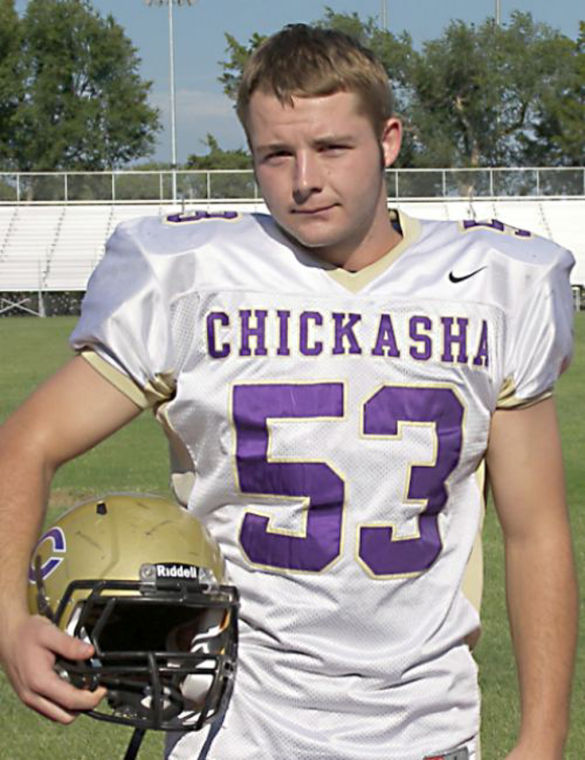 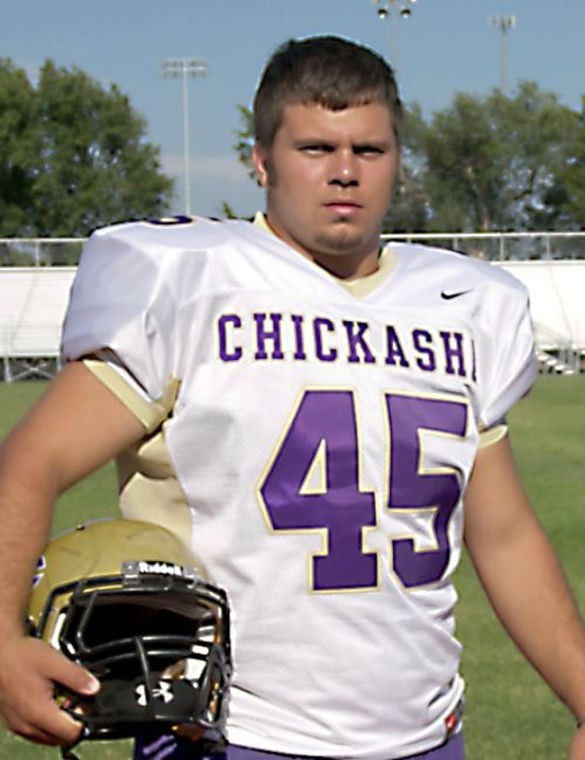 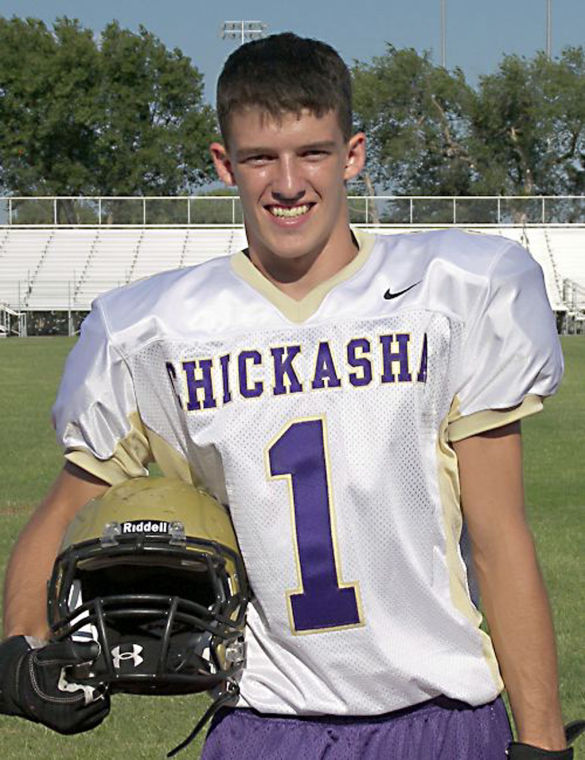 By CHUCK LARSEN Sports Editor Rick VanCleave’s Fightin’ Chicks took out some frustration from the past few weeks on Northwest Classen Friday night for their second win of the season. The Chickasha defense was on top of its game again, but the offense was a little out of synch. Still, Chase Rodgers and Co. ran out to a 34-0 lead before the Knights scored against the second team defense in the waning minutes to avoid a shutout. “I thought our timing was a little off offensively and I didn’t think our routes were very good,” VanCleave said after the game, “but we had our Wednesday and Thursday practices rained out so we didn’t get an opportunity to work too much on them.” Quarterback Chase Rodgers threw for 182 yards and a touchdown and rushed for a team-high 108, but was sacked seven times, mostly cover sacks, by the blitzing Knight defense for a minus 37 yards. Otherwise, the strong-armed junior kept them off balance, spreading the ball around between TE Taylor Wilson (4 catches for 69 yards and a touchdown), WR Rakee Stevenson (4 for 45), WR Jaree Blakes (4 for 38), RB Jonathan Skinner (2 for 15) and WR Devrick Gray (1 for 18). Chickasha’s running game opened up with Skinner rushing for a nine-yard touchdown and 78 yards, Wilson adding 28, Rangel contributing 18, Stevenson with 11 and youngster Brady Bellinger adding a nine-yarder late in the game. The Chicks ran the ball well, finishing with 209 net yards and three rushing touchdowns. The Chick defense, their strong suit so far, continued to shine. The Knights like to spread the field and throw the ball. They finished with 236 total yards, 202 up top, but breaking it down, 56 were on two long completions in their initial series, which the defense stopped to get the ball back on downs, a 60-yard drive in the fourth quarter that ended with two tipped breakups and a short field goal attempt and 31 on their final drive, the touchdown toss. “We were a little sloppy offensively but I thought our defense played extremely well,” the coach said. “They put the ball in the air a lot but we had several picks and several breakups as well. I was impressed with our secondary and also up front.” Meechie Euwins had two interceptions and Zach Funderburk had one. Funderburk, everyone in the press box’s choice for Player of the Game, had a big night, highlighted by a 55-yard (not 50 as originally reported) punt return for the Chicks’ second touchdown. “It was great to finally get a score on special teams,” VanCleave said. “That was the first one since I’ve been here and I hope it’s the first of more to come.” Senior Chance Thomas was scheduled in to get some field time this week, but was held out again to give his leg another week’s healing time. “We didn’t think we’d need him this week so we decided to keep him out,” VanCleave explained. “Chance still hasn’t had any contact since he got hurt. We’ll let him run and make some cuts on it this week and see how it goes. He has a doctor appointment this week so we’ll see how that comes out also. We hope to break him in a little next week but we certainly don’t want to throw him out there too quickly and risk him getting hurt again.” Overall, the coach was pleased with the team’s effort and very happy for them to grab a win in front of the large Homecoming crowd. “There were a lot of good things we took away from this game,” he said. “We did a much better job of running the ball and our offensive line did a good job up front. “We were a little disappointed that we didn’t throw the ball as well as we would have liked but a win’s a win. We’ll take it.” Chickasha will try for two in a row Thursday when they travel to Western Heights,who went to 1-5 Friday with an identical 34-7 loss at Altus. We’ll check that out in Wednesday’s prep previews.