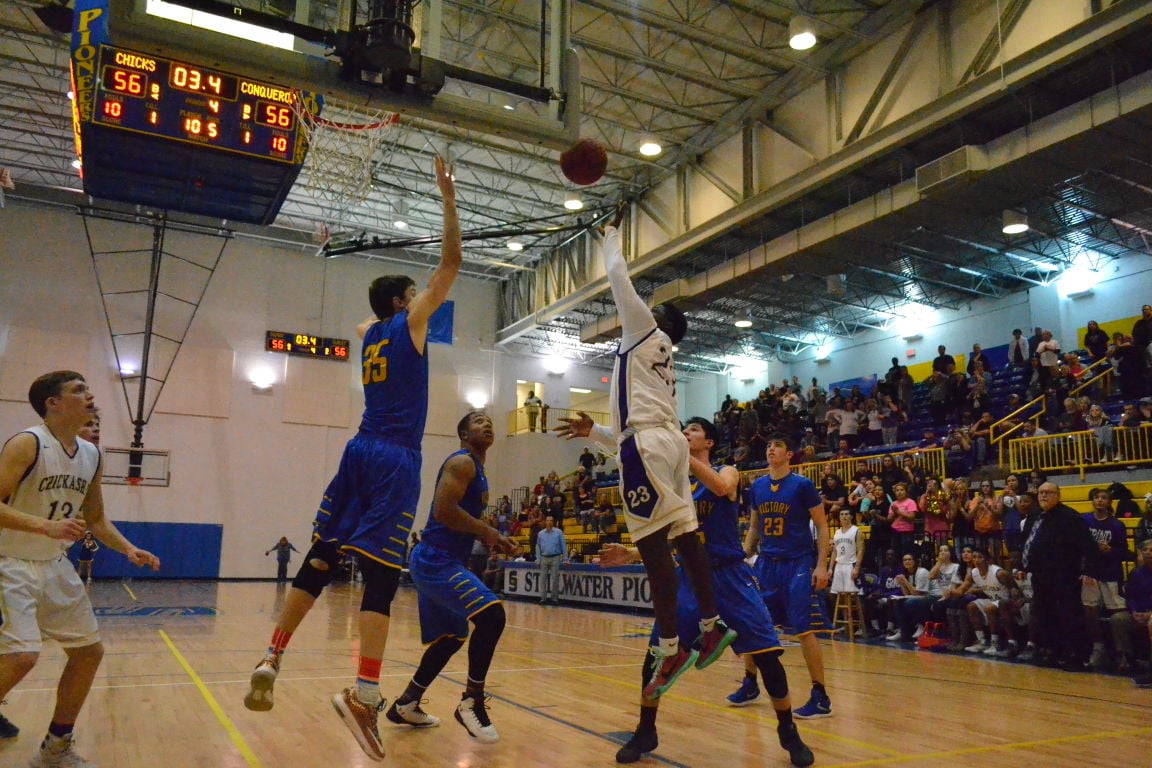 Chickasha senior Braeden Blakes puts up the game-winning shot over Hunter Holmes of Victory Christian on Friday night in Stillwater in the Area I Boys' Championship game. 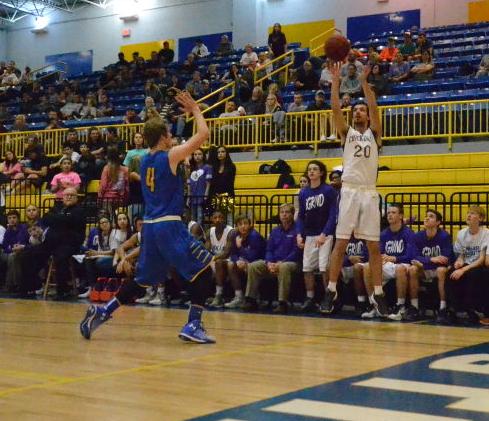 Chickasha senior Colton Christian shoots one of his five three-pointers against Victory Christian during the Area I Championship game in Stillwater on Friday. 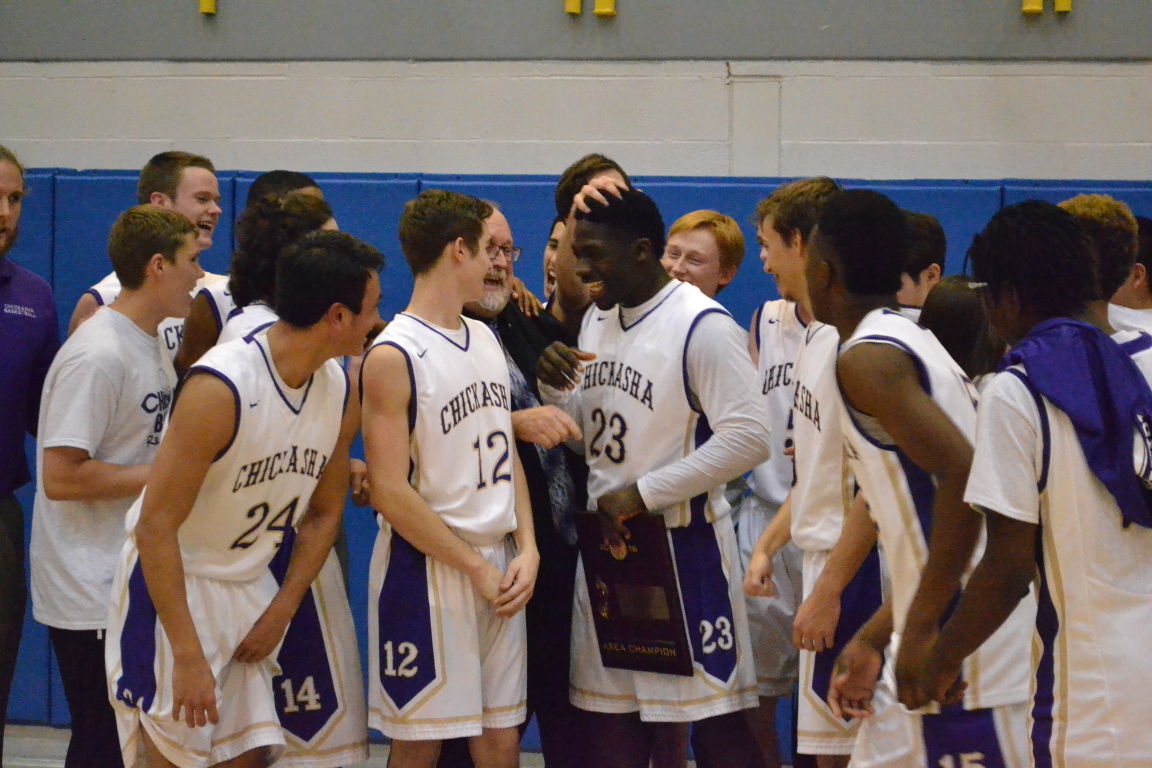 Chickasha senior Braeden Blakes puts up the game-winning shot over Hunter Holmes of Victory Christian on Friday night in Stillwater in the Area I Boys' Championship game.

Chickasha senior Colton Christian shoots one of his five three-pointers against Victory Christian during the Area I Championship game in Stillwater on Friday.

Some late magic was required on Friday to keep it that way. Senior Braeden Blakes cast the spell, banking in a close-range jumper with 1.6 seconds remaining to give No. 6 Chickasha a 58-56 win against No. 3 Victory Christian.

The result is the 4A Area I championship and a trip next week to Oklahoma City for the 4A State Tournament.

Victory initially turned a halftime deficit into a commanding third-quarter lead and looked the most likely to win. The Conquerors, led by sophomore Caleb Calhoon’s 12 points, went on an 11-0 run out of halftime to hold a healthy lead entering the fourth quarter.

It was cut down to size by Chickasha and senior Colton Christian, who sank five three-pointers for a game-high 22 points. His overall contribution was most evident in a third-quarter series in which Christian had a block at one end and drilled a three from the right corner at the other to take Victory’s lead down to just two points.

It had built up through a group effort. Senior Jon-Michael Terry — a University of Oklahoma football commit — asserted his influence on the blocks and opened up the court for the Conquerors to seize momentum.

Terry finished the night with 10 points.

Eli Freeman sank his second three-pointer of the game, and he then got the steal that led to a pair of free throws from Sebastien Davet. The 6’ 4” shooting forward was a major scoring outlet, but he only managed 10 points before fouling out early in the fourth quarter.

Calhoon sank back-to-back buckets as another part of Victory’s run, but he saved the fireworks for later. Chickasha was hitting back through Christian and Caleb Nichols, who scored six of his 11 points and recorded two of his three assists in the third quarter.

With a few seconds remaining, Calhoon sank a three-quarter court shot at the buzzer that would make even Steph Curry proud. Any momentum the Fightin’ Chicks had was sucked away.

They had to start over.

Up until the fourth quarter, Brock Henderson was having a rough night. A few traveling calls here and missed shots there took him out of his rhythm, but he collected himself enough for the biggest contribution.

Christian had just sank his fifth three-pointer of the night, Magyver Boles sank a pair of free-throws and Blakes pestered Terry enough on the defensive end to keep him quiet. The deficit was down to three.

Just as the minute mark passed, Henderson stepped back on the left wing and floated in a three-pointer to tie the game up. Momentum switched sides completely when on the ensuing inbounds play, Victory’s pass bizarrely touched no one and went out of bounds on the baseline.

The eight seconds remaining was enough time for Blakes to get his shot, taking him to 10 points on the night and bringing so much more for Chickasha.

Funeral service for Arthur "Hoppy" Dwight Hargus will be at 2:00 PM Friday, May 22, 2020 at Bible Baptist Church in Chickasha, OK. Pastor Lynn Walker will officiate. Hoppy was born the son of Arthur "Poss" Raymond Hargus and Ruth (Reed) Hargus on December 16, 1950 in Cement, OK. He passed fr…

Graveside service for Louise Bell, age 76 of Alex, Oklahoma, will be held at the Alex Cemetery on Wednesday, May 20, 2010, at 1:00 p.m.. Rev. Ashley Green Young will officiate. Grace Louise was born the daughter of George Stuard and Arvada Rodgers Stuard on April 13, 1944. Louise and her sis…

Douglas Derrell Kuhlman, age 30, died on May 8 2020. He is survived by his son Jaxon, his sister Brittany Kuhlman, mother Lisa Kuhlman, father Tracy Kuhlman, and uncles Terry Kuhlman and Kevin Kuhlman. A private family service will be held to honor his passing. Cremation arrangements are wit…