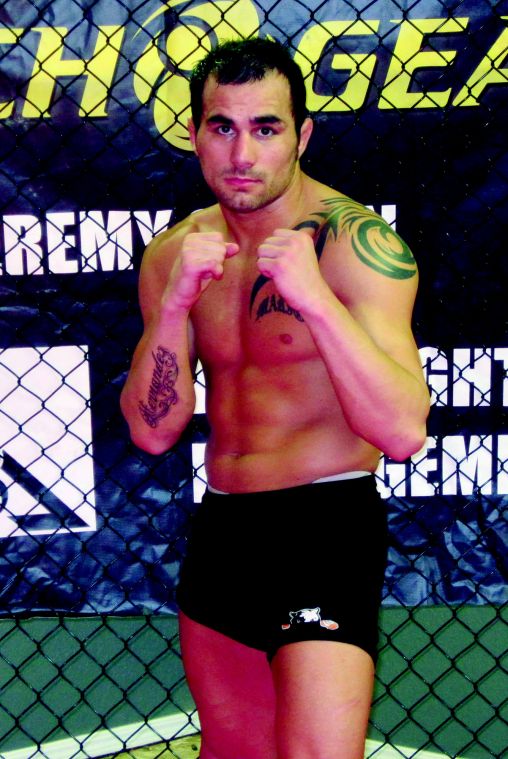 Jeremy Spoon, a 2004 Chickasha Hgh School graduate and former state champion wrestler, will be going for the King of the Cage World Title when he meets Donald Sanchez, below, on Aug. 20 in Norman. 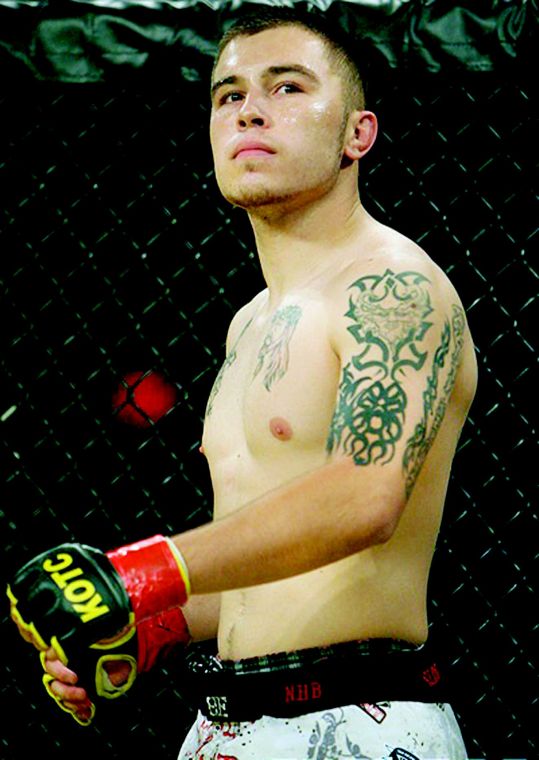 Donald Sanchez will be Jeremy Spoon's opponent on Aug. 20.

Jeremy Spoon, a 2004 Chickasha Hgh School graduate and former state champion wrestler, will be going for the King of the Cage World Title when he meets Donald Sanchez, below, on Aug. 20 in Norman.

Donald Sanchez will be Jeremy Spoon's opponent on Aug. 20.

Jeremy Spoon is best known in the Chickasha area as a state champion wrestler.  That soon may change, or at least in another form of combat could be added to his image.

These days, Spoon, at 155 pounds, is taking on the sport of cage fighting and is going for a major title.

He is scheduled to fight Donald Sanchez for the King of the Cage World Title, Aug. 20 at Riverwind Casino in Norman. It will be the main event.

Spoon, a 2004 Chickasha High School graduate, was a state champion on the mat  his junior year and was runner-up as a senior.

"I always wanted to do it," Spoon said. "I thought I would be good at it and I tried it."

His thoughts have come true with immediate success, sporting a 10-0 record.

Cage fighting is a whole different venue compared to wrestling, but being a grappler has been of benefit for the Fightin' Chick alum.

"In a couple of fights, this one kid had some pretty good kicks," Spoon said. "I had to take him down before too long. When you start taking down the leg, the leg gets tight and it's hard to move. If I hadn't wrestled, it would have been different."

With the fight still less than two months away, Spoon knows there is a tough road of rigorous preparation ahead.

"It will be some tough training," he said. "I'll be focused on trying to get better in everything. I got to work my butt off for this one."

You must when you're gunning for a title. Sanchez has record of 22-11, but don't be fooled by the number in the loss column because he is the current champion.

Spoon is also aiming to fix another technique, for when he enters the ring….uhm…cage.

"I'm going to try to stay more relaxed in the cage. I often let my adrenaline get to me in the cage," he said.

In his last fight, Spoon defeated Ramiro Hernadez Jr. by virtue of a decision.

It's won't be the first time Spoon has fought nearby. He has also fought bouts in Oklahoma City.

"It's (in regards to fighting in Norman) really basically the same thing you have in the city (Oklahoma City)," he said.

But this time could be the last.

"They need to see him now or they may not see him at all," said Larry Srock, Spoon's manager.

He is believed to go on to bigger things in the sport if he wins, so Chickasha fans should take advantage of this opportunity to see him in action.

"Just come on out and watch me fight," Spoon says to local fans. "I'll do my best. It'll be a tough fight.

"Hopefully, I can finish things off and win the belt."