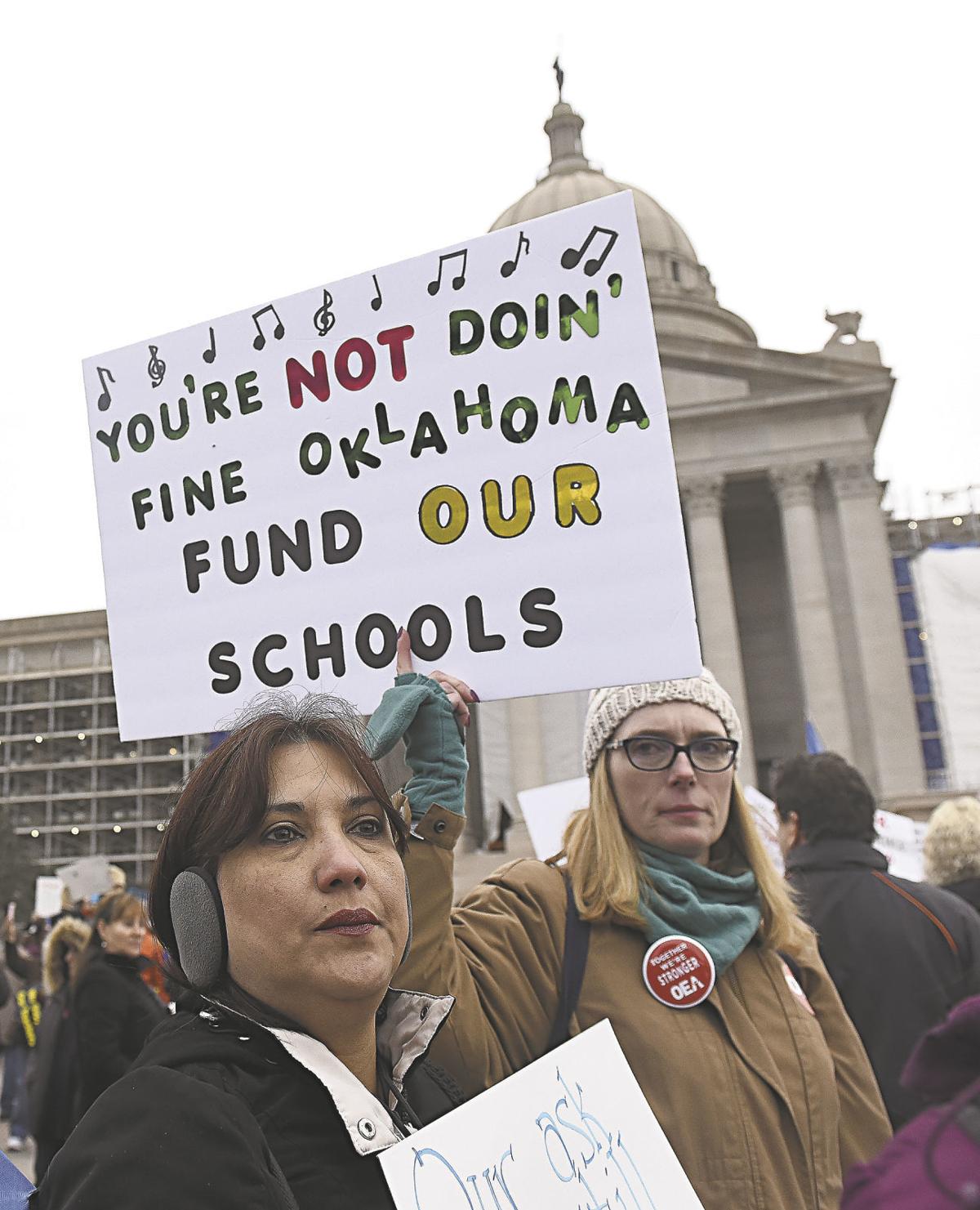 Oklahoma teachers and their supporters form a picket line as they walk around the Oklahoma Capitol building, Monday, April 2, 2018, to petition the government for more pay and services for their schools. (Kyle Phillips / The Norman Transcript) 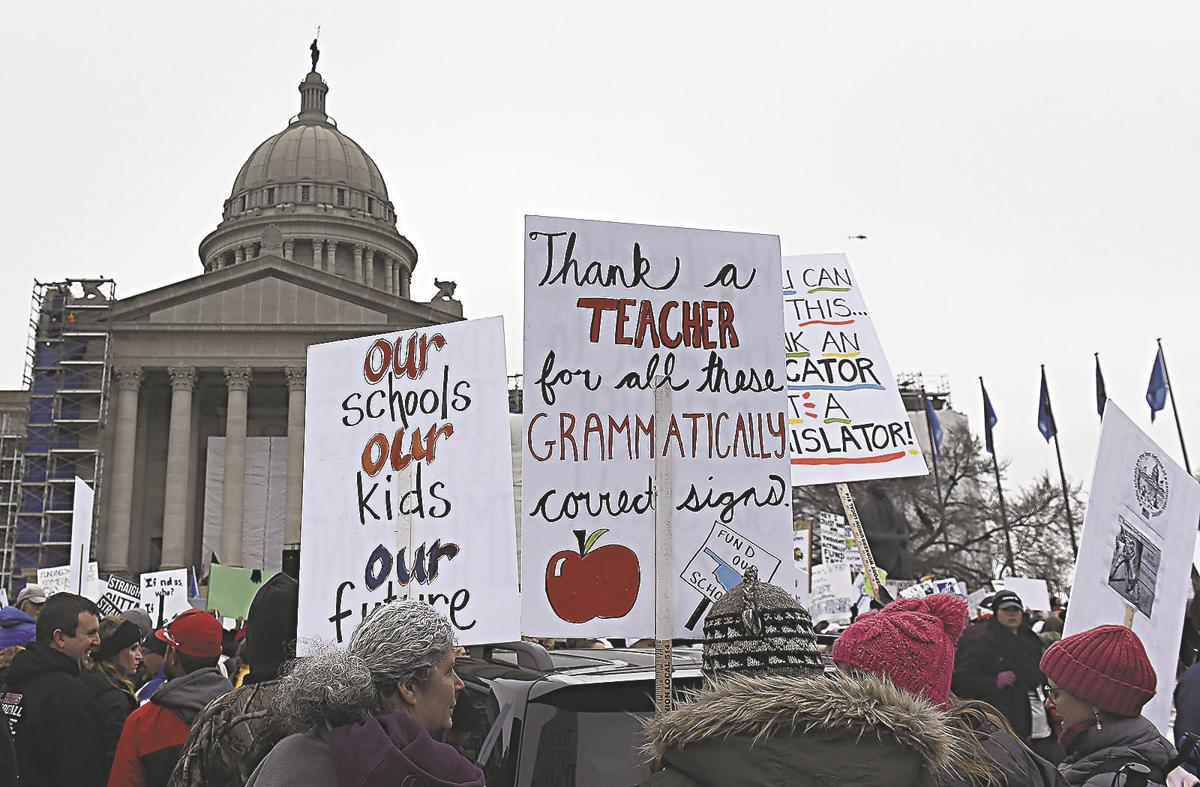 Teachers and their supporters hold signs as they gather in front of the Oklahoma Capitol to rally for more money for them and their students, Monday, April 2, 2018. (Kyle Phillips / The Norman Transcript)

Oklahoma teachers and their supporters form a picket line as they walk around the Oklahoma Capitol building, Monday, April 2, 2018, to petition the government for more pay and services for their schools. (Kyle Phillips / The Norman Transcript)

Teachers and their supporters hold signs as they gather in front of the Oklahoma Capitol to rally for more money for them and their students, Monday, April 2, 2018. (Kyle Phillips / The Norman Transcript)

But, they said much work remains to fully — and adequately — fund public schools statewide.

Teachers said class sizes are growing, and education funding isn’t keeping up. There aren’t enough supplies, and textbooks are falling apart. Oklahoma is struggling to keep qualified educators in classrooms because of low pay. And others said they’re not sure if they trust lawmakers to keep their promises to continually finance raises and education funding increases.

State lawmakers hoped to placate teachers by passing the first tax increases in more than a decade. That legislation will pump $50 million more in increased classroom spending and fund raises for teachers and support staff.

Under the plan, Oklahoma would move from last to second in regional average teacher pay, education officials said. The average Oklahoma teacher made $44,921 last year, according to the state Department of Education. The regional average was $48,450.

More experienced classroom teachers would receive an even larger raise in Oklahoma. For example, certified teachers with 25 years experience could see their pay increase by nearly $8,000 to top out at $51,232, according to a budget analysis.

The tax package increases the gross production tax charged to oil and gas drillers. It increases the state’s gasoline tax by 3 cents and the diesel tax by 6 cents. Consumers will pay $1 more per pack of cigarettes. Lawmakers also plan to cap the amount of itemized deductions Oklahomans can claim on their taxes.

In addition to the raises, state lawmakers have already passed next year’s education budget, which increased education spending to $2.9 billion — a nearly 20 percent increase from current levels.

“I’ve been teaching 19 years and class sizes have gotten bigger over the years. Enough’s enough,” said Jeff Janzen, a 19-year educator who teaches middle school social studies in Edmond. “I would hope that they can find some more funding.”

Janzen was waving a sign that read: “Hey Mary, education funding shouldn’t be historic, it should be normal,” in a message to the state’s Republican Gov. Mary Fallin.

Mary Ryan, a 22-year educator who teaches middle school computer and science technology in Edmond, Oklahoma, said her average class size is around 30 students, and she teaches as many as 180 children a day.

“There’s no way I can give 180 kids my full attention and know what’s going on in their lives and love them like I should,” Ryan said.

Hendricks and her colleagues carpooled from Tahlequah and plan to spend the night so they can rally again Tuesday. She said teachers, who had to park off-site, waited as long as three hours to catch shuttles to the Capitol.

It wasn’t clear how long teachers planned to walk out of schools and rally at the Capitol. The Oklahoma Education Association, which is the state’s largest teacher’s union, said it would evaluate each evening this week whether the rally would continue the next day.

CeCelia Garringer, of Enid, Oklahoma, said she took the day off from her job as a surgical technologist to rally for her district’s teachers. She carried a sign that read “Teachers made your job possible.”

Garringer, who has a 4-year-old daughter, plans to enroll her in Pre-K classes this coming school year.

“I want her to have a very good education so then that way she can become whatever she desires, and she won’t be held back just because someone decides her education isn’t worth funding,” she said.

State Rep. Jacob Rosecrants, D-Norman, Oklahoma, said education supporters need to muster larger crowds because some of his colleagues think “they can dodge this bullet and be good to go.”

“There’s a whole plethora of different things that we have to get under control as a state,” he said. “So right now, we’ve got what we can do at the current moment, but we have to keep striving to be better in Oklahoma as far as how we govern.”

Janelle Stecklein covers the Oklahoma Statehouse for CNHI's newspapers and websites. Reach her at jstecklein@cnhi.com.

What the Legislature’s education funding measures do:

• Will spend about 53 cents of every dollar on education, up from 49 cents.

• Increases overall school spending by $50 million — of that $33 million must be spent on textbooks.

• Spends $52 million on raises for school support staff; the average employee will see a $1,250 increase in pay.

• And lawmakers will allocate $63 million for public employee raises: