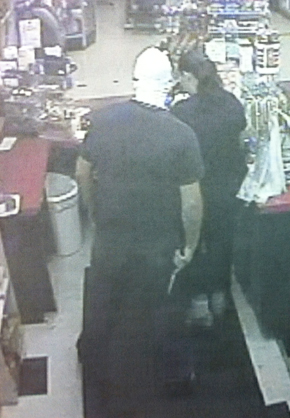 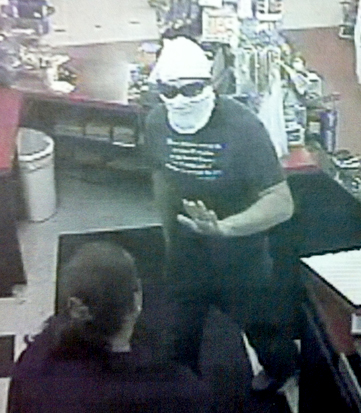 Chickasha detectives are asking for the public’s help in identifying a knife-wielding robber who stole an undetermined amount of cash Tuesday morning from the Coastal Mart convenience store, 828 W. Grand Ave.

The armed robbery occurred at 7 a.m.

“There are no identifying marks outside of his clothing to give us an idea as to his identity,” Moore said.

The robber, a white male, is between 5-foot-9 and 6-foot-2 and weighs between 180 and 200 pounds. He was wearing dark pants and t-shirt, a white covering on his head and face and dark glasses.

Moore said there are five lines of type on the t-shirt, but police haven’t been able to make out any words.

Investigators are unable to pause the video when viewing it and have to photograph the screen to capture still images, which affects the quality.

The knife, which the man holds to his side in his right hand, appears to be a large folding knife, Moore said. The major added that the robber doesn’t brandish the blade, but holds it out from his side for the clerk to see. After taking cash from the register, the man left the store and fled on foot.

Anyone with information on the robbery or the suspect is asked to call the police at 222-6050 or Crimestoppers at 224-TIPS (8477). Callers can remain anonymous.