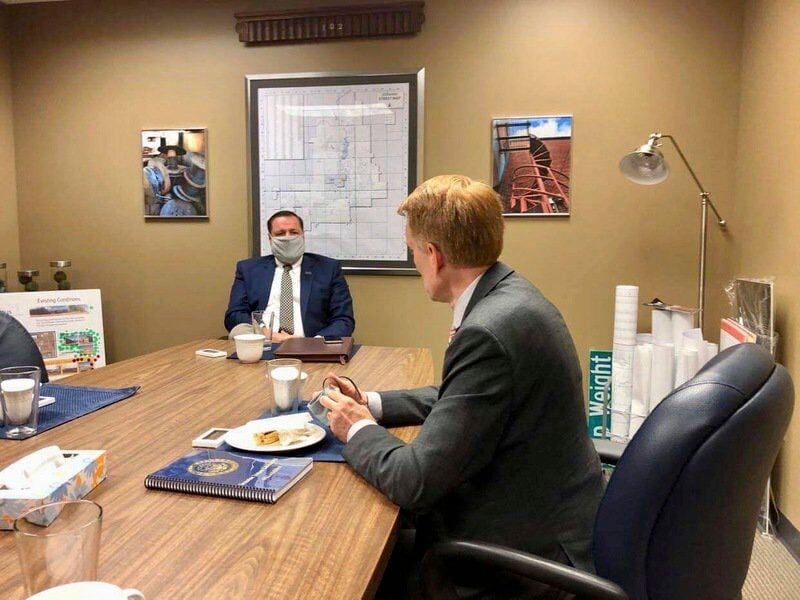 Stillwater Mayor Will Joyce and City Manager Norman McNickle sat down with Sen. James Lankford on Tuesday to talk about federal issues impacting Stillwater and the state. Financial assistance for airlines was one topic. Provided 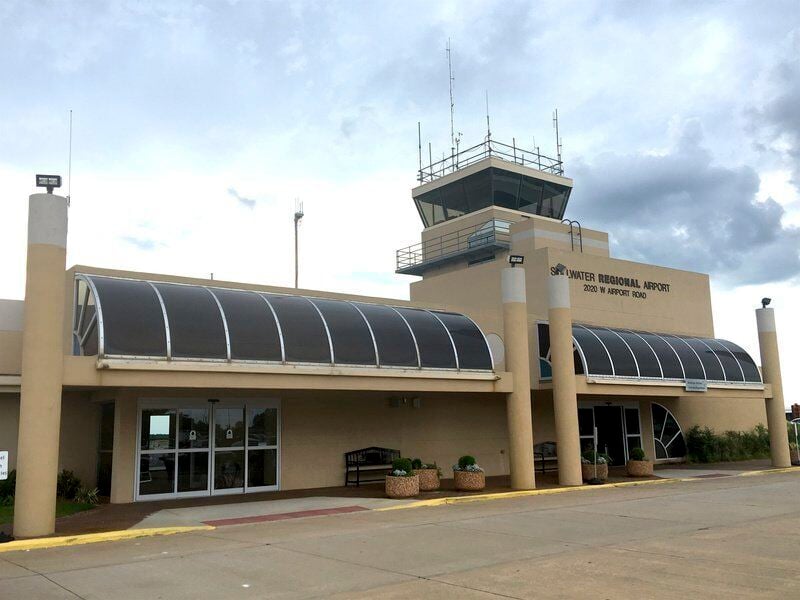 Stillwater Mayor Will Joyce and City Manager Norman McNickle sat down with Sen. James Lankford on Tuesday to talk about federal issues impacting Stillwater and the state. Financial assistance for airlines was one topic. Provided

Efforts are underway at the federal level to help the airline industry, which has seen demand plummet as COVID-19 put the brakes on both business and leisure travel.

Sen. James Lankford shared a hopeful message about that with Mayor Will Joyce and City Manager Norman McNickle when he stopped in Stillwater Tuesday.

Stillwater Regional Airport is on the list of 15 smaller markets where American Airlines has announced it will temporarily suspend service beginning Oct. 7 and running through Nov. 3.

The airline has also announced it will cut more than 40,000 jobs – targeting 19,000 positions through layoffs or furloughs and more through buyouts and early retirements– on October 1.

That would cut about 29% of the company’s pre-pandemic workforce unless it receives an extension of CARES Act funding to support employee payroll.

The senator confirmed that Oct. 7 is the date the previous federal assistance package, which carried requirements that airlines receiving it maintain staffing and routes, expires.

Joyce said city leaders have spoken with Sen. Jim Inhofe’s office several times and the senator has said there seems to be plenty of support for airlines to get additional funding, but not in time to head off the Sept. 30 deadline.

Lankford disagreed, saying he thinks it will be attached to the federal funding mechanism that has to be done by Oct. 1.

“I do think we’ll have a vote on that before Sept. 30,” he said. “… The next big push is to get all the funding done for COVID at the same time we’re trying to get the budget work that has to be done. There will be a continuing resolution … So I’m a little more optimistic we’ll get that done by Oct. 1.”

He said he, Inhofe and Congressman Frank Lucas had written a letter to ask American Airlines to visit with the City of Stillwater and the county to find a way to revisit its decisions.

Lucas’s office released a statement Tuesday saying American Airlines is the third largest private sector employer in Oklahoma with over 6,000 employees, many of whom are located at the world’s largest commercial aviation maintenance base – American Airlines’ Tech Ops – Tulsa facility.

“The COVID-19 pandemic has made a long-lasting, negative impact on our nation’s aviation industry. As emergency federal aid expires at the end of the month for our aviation industry, it’s critical Congress and airlines recognize the significant impact these regional routes have in our communities, including providing employment opportunities, promoting tourism, and supporting the local economy,” Lucas said in his statement.

Lankford, Joyce and McNickle agreed it would be good if American Airlines could commit maintaining a presence in Stillwater, even if that meant just one flight a day.

“Just keeping the one around is our concern,” Joyce said. “When you pull out and they say its temporary, it’s just one of those things where you never know if it’s really going to come back.”

McNickle said the city would be “tickled” to just maintain the early out and late in daily flights.

He noted that city leaders had expected travel numbers from Stillwater to be “horrible” but said the average load factor, the amount of occupied seats, was 45%.

“It was a lot higher than we expected it to be,” McNickle said. “So people are still traveling.”

Joyce said city leaders have had several discussions with the airline and would be having another call later. He thinks its the business travel piece of the puzzle that will be difficult, with more people working remotely and meeting virtually.

Lankford said there would be an attempt to include something in the bill in September to address liability concerns.

“So many companies are not putting folks on a plane saying, ‘I just don’t want to be sued, we’re toast if we do that,’” he said. “We’ve got to be able to get that piece resolved...”

Lankford said the federal government gave $25 billion to the airline industry in March, in the form of grants and loans..

“That was targeted to ‘What can we do to stabilize this?,’” he said. “Knowing that you’ve got all those employees nationwide that will all go to unemployment. So it’s kind of like the Paycheck Protection Program. We could have just said, ‘Everybody goes to unemployment,’ but our unemployment system is not set up for that. It’s not set up for the numbers, obviously, that it would have to deal with. It’s not just an Oklahoma issue, it’s a national issue. There’s nowhere in the country that is set up to handle the numbers

“… We put $25 billion into the program to give those companies capital and in grants to keep those employees from going into unemployment … It’s a very hard call. Those are very big numbers.

“People say, ‘Why are you helping some big multinational corporation like American Airlines?’ Because they have employees, they’re Americans and because then they would end up in the same spot as everybody else.”