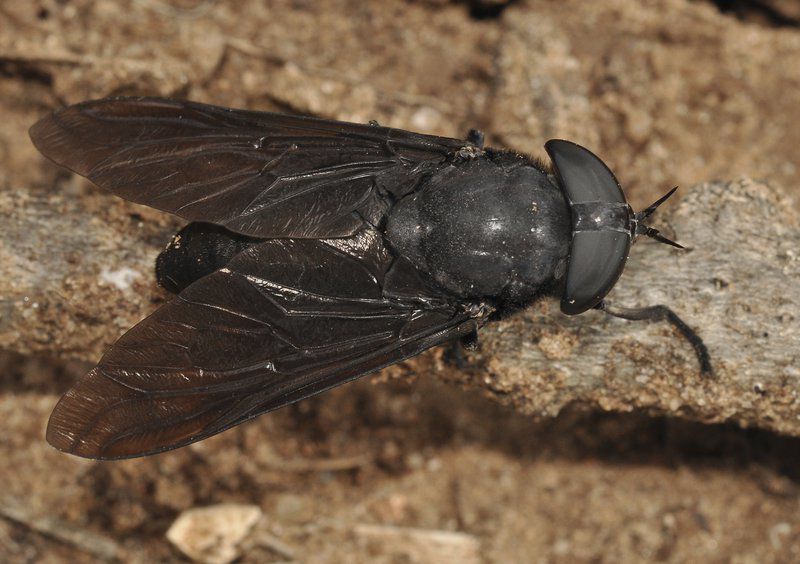 A black horse fly perches on a fallen tree branch. Note that the body length is about an inch, but the fly is longer with folded wings included. 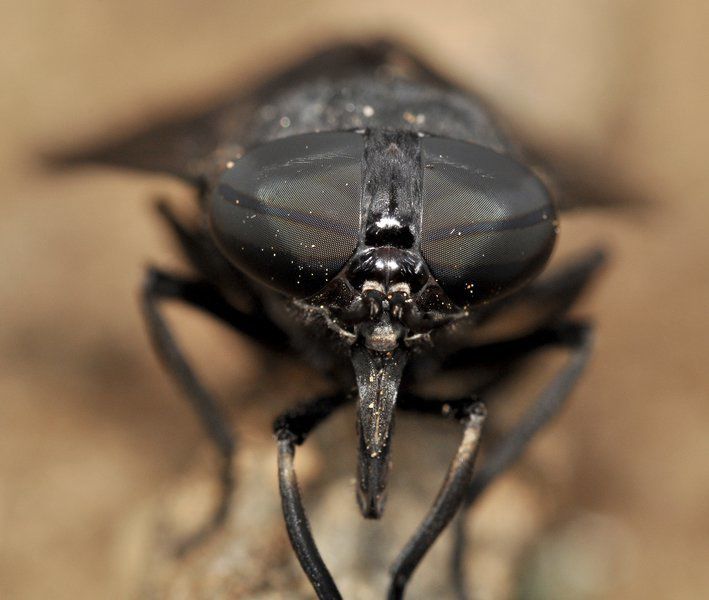 This is the same horse fly from the first photo. This is a female, which is equipped with the necessary mouth parts to drink blood from large animals. Note the separation between her eyes. Females have the separation, whereas the eyes of males butt up against each other.

A black horse fly perches on a fallen tree branch. Note that the body length is about an inch, but the fly is longer with folded wings included.

This is the same horse fly from the first photo. This is a female, which is equipped with the necessary mouth parts to drink blood from large animals. Note the separation between her eyes. Females have the separation, whereas the eyes of males butt up against each other.

For many people, flies are creepy; the way they look, the way they sound when buzzing around your head, and the way you feel when one lands on your skin.

And if that’s the case, imagine a fly that is 10 times larger than the typical house fly.

But whereas house flies may land on you to consume the sweat or dead flakes on the skin, horse flies prefer to consume your blood.

For me, there are two shocking things about the black horse fly: the size, and the bite.

Now, for the most part, people need not fear these beasts as they mostly prey on livestock. And although it is unusual for them to attack humans, I have unfortunately been the victim of one of these creatures in the past.

But first, allow me to describe them, along with what and how they eat.

There is more than one species of horse fly in the United States, but the black horse fly is the largest, along with the American horse fly. They both grow to a body length of one and one-eighth inch. They appear longer with folded wings.

Obviously, black horse flies are black in color. The Latin name is tabanus atratus, with “atratus” meaning “clothed in black.”

Now here is where it gets interesting. Only females drink blood.

And although male and female look similar, there is one defining feature that that distinguishes the two. With males, the huge eyes touch in the middle. Females have a space between the eyes (see photo).

Horse flies are diurnal, meaning they are active during the day.

As mentioned previously, females consume blood, particularly the blood of large animals such as livestock.

Males actually drink the flower nectar. Females drink nectar, too, but they also need quite a bit of blood to maximize reproduction, according to entomologists.

The female’s method of acquiring blood is rather brutal. Believe me, I know! They have blade-like mouth parts which allows them to slice open skin, and then lap up the blood therein.

Males lack these mouth parts, so there’s no danger there.

Now, allow me to take you back to a summer day, maybe 28 years ago. It was the early 90s, and I was young and in good shape. As the singer Bob Seger might say, I was “Like a Rock.”

It was a hot day, so I was shirtless. My skin was quite dark at the time, which may have played a role in the scenario as horse flies are attracted to darker colors.

While operating an old and loud Ford tractor, and cruising along doing just fine, I felt a sharp, stabbing pain on the back of my right shoulder.

I quickly turned my head, and, there on the back of my shoulder was a black horse fly staring up at me while she dined on my flesh, or what lied beneath, to be more precise.

I slammed down the clutch pedal, disengaged the brush hog and then knocked the offender away using my left hand.

Upon examining the wound, I noticed she had created a small crater in my skin, which contained a pool of blood.

It was barely an inconvenience, but the look of that thing dining on my shoulder was extremely creepy.

But in general, bites from horse flies aren’t really harmful to humans. They can cause itchiness, inflammation and swelling and maybe bruising around the bite area.

The bites are usually only a problem for horses, because horse flies carry equine infectious anemia, also known as swamp fever. When they bite an equine animal, they can transmit the life-threatening disease, according to Healthline.

Black horse flies can be found east of the Rocky Mountains and all over Oklahoma.

Black horse flies tend to stay close to water -- within a mile or so -- and for good reason. Water is where these creatures spend most of their lives as larvae.

According to entomologists at the University of Wisconsin Milwaukee, black horse flies lay their eggs in mounds on sedges and other vegetation above water or wet ground, and they may deposit three or four such masses.

Larvae spend their time as aquatic creatures feasting on other aquatic invertebrates. They eventually leave the water and pupate underground before crawling out as a fly.

Randy Mitchell is a freelance writer and photographer. He has been an avid birdwatcher, nature enthusiast and photographer for more than 40 years. Reach him at rnw@usa.com.