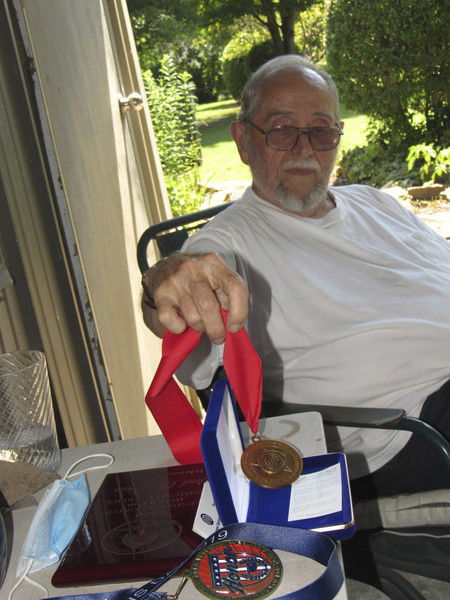 Bud Hinshaw shows medals he received for his work in Optimist International and being a veteran, as well as a Legends Recognition plaque from Legacy Keepers of Muskogee. 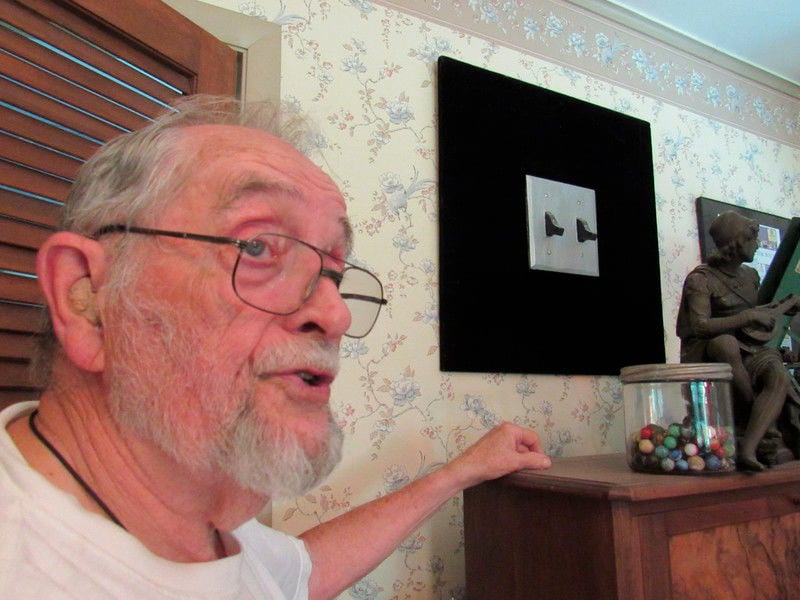 Bud Hinshaw talk about his first pottery art project, a larger-than-life depiction of light switches. He taught classes in El Paso and Muskogee.

Bud Hinshaw shows medals he received for his work in Optimist International and being a veteran, as well as a Legends Recognition plaque from Legacy Keepers of Muskogee.

Bud Hinshaw talk about his first pottery art project, a larger-than-life depiction of light switches. He taught classes in El Paso and Muskogee.

"I've been in the public eye all my life," said the descendant of Quaker homesteaders in Kansas.

He worked through high school as a popcorn popper with the Eata Bita Popcorn company. He pumped gas. He worked as a fireman on the Atchison Topeka and the Santa Fe railroad.

“On a diesel engine,” he said. “Steam had just been phased out. I served as a messenger on the Cyrus K. Holiday locomotive. All I had to do was sit there and watch the pressure on it."

That was all before he spent four years with the U.S. Air Force, stationed for a while at the Bikini Atoll nuclear test site in the South Pacific.

He worked on the railroad again when he returned to the states.

“I bummed around Kansas, Oklahoma, Colorado and Missouri on the rail line,” he said. “When they needed somebody, I’d show up over there to make a run, establish seniority, get laid off. We had to find our own flop house or a place to stay, usually $1 a bed or 50 cents a bed."

Hinshaw eventually decided he didn't like railroad life, so he studied to be a barber.

He also studied pottery while majoring in art a University of Texas at El Paso. He taught pottery in El Paso, as well as in Columbia, Missouri, and in Muskogee.

Hinshaw came to Muskogee about 35 years ago when his wife became director of the Eastern Oklahoma District Library System.

His first Muskogee job was truck driver and grower for Bebb's Greenhouse, delivering flowers in Oklahoma, Arkansas and Texas.

He later got a job with the U.S. Postal Service, mostly driving a rural route in Fort Gibson. He worked as a driver for Muskogee Transit before being medically discharged last January.

Muskogee Morning Optimist Club takes up much of Hinshaw's spare time. He is in line to be club president next year.

He also is active in Toastmasters, which he said was "one of the best things that ever happened to me."

Bud Hinshaw recalls encountering some mean dogs during 15 years in the Postal Service. He spent most of those years on a rural Fort Gibson route.

His job began with sorting the mail at 7 a.m. Then he would drive his 109-mile route, delivering at up to 900 stops.

"Stopping at every mail box, top speed about 25 miles an hour," he said. "It would be at least a six-hour drive."

He said he knew how to communicate with some dogs.

However, he once had to use pepper spray on one dog. He said the dog had tolerated him in earlier visits.

"One day he came around the house, yapped at me, bared his teeth and I said, 'OK, I'll be ready for you next time.'"

That next time came when the dog charged at him from atop a hill.

"And he was coming right at me," Hinshaw said. "I raised my pepper spray at him. Pssht!  I hit him right on the nose. He did a flip in the air, started yapping and went back to the top of the hill full speed."

Hinshaw recalled returning to the house a couple of weeks later.

"Here he came again," Hinshaw said. "I raised my hand up. I had my pepper spray. He saw my hand go up and he ran."

The dog later bit another mail carrier and eventually had to be put down because of his viciousness, he said.

Hinshaw calls his job as a Muskogee Transit driver his community service job.

"A friend of mine in Emporia drove a bus up there for the city," he said. "So I applied down here. They hired me on the spot and gave me training."

"I've driven every route in town," he said. "My most memorable passenger. In my training time, it would have been this person who got on the bus and there seemed to be this green cloud of haze around him. He smelled very bad."

He recalled another man who went berserk on the bus.

"He got very, very violent," Hinshaw said. "He ran to the door to get off. It was open and a man with him said 'shut the door.' And the guy slammed his arm through the door."

Hinshaw also recalled swerving onto a Shawnee Bypass shoulder after a woman sideswiped the bus.

"I had about 13 people on the bus," he said. "I didn't roll over. And the rescue people said, 'you did a fantastic job of handling that.'"

Hinshaw discovered the Optimist Club one Christmas more than 30 years ago.

"I was brand new in town," he said. "We always bought a real Christmas tree, and the Morning Optimist was selling Christmas trees behind the old meat market."

Since then, Hinshaw has been waking up before dawn each Wednesday, just in time to make the 5:30 a.m. meeting.

"By 6 o'clock we'd have breakfast, then a guest speaker, business meeting, a fun time," he said.

He said the best part of the group is "the socialization, the friendships. The people you meet, you wouldn't expect to meet."

"You meet people from all around, every walk of life," he said.

Hinshaw created his own calling card, which bears the club's logo and says "Optimists bring out the best in kids."

He said the best time he had as an Optimist was helping create the BRICK Optimist Club, made up mostly of black women.

"I was challenged, for the purpose as to keep Optimism in Muskogee," he said. "That club has the most intelligent women, the up and comers."

HOW DID YOU COME TO BE AN OKIE FROM MUSKOGEE?

"Wife's job. She took a job down here as director of the Eastern Oklahoma Regional Library Service and I followed her down. We've been here about 35 years."

"I had grown to establish some roots here, developed roots around town. I feel comfortable around here now. I know some people, people I never thought I'd associate with."

WHAT WOULD MAKE MUSKOGEE A BETTER PLACE TO LIVE?

"I've seen Muskogee develop immensely in the time I've been here. It's making progress that's only going to make it better."

WHAT PERSON IN MUSKOGEE DO YOU ADMIRE MOST?

"Edward Warren and Tessie Warren. I met Edward and Tessie in Sunday School. They were very instrumental in establishing Habitat for Humanity. Edward became the best friend I ever had in Muskogee. I was with Edward for years at St. Paul in the choir."

WHAT IS THE MOST MEMORABLE THING TO HAPPEN TO YOU IN MUSKOGEE?

"Establishing the Optimist BRICK Club in Muskogee. I'm a member of Morning Optimist ,and one of their projects is to establish new Optimists. I wanted to keep Optimism in Muskogee. I was told we couldn't do it, but 90 days later, we had the BRICK Club here in Muskogee."

WHAT DO YOU DO IN YOUR SPARE TIME?

"Right now, my spare time seems to be devoted to napping. I found out I just don't have all the oomph that I used to have. I'm coasting along day to day, playing in the yard. Working in the garden."

HOW WOULD YOU SUM UP MUSKOGEE IN 25 WORDS OR LESS?

"It's time for a change. It is changing, so far for the better. Muskogee does need a reliable transportation system."