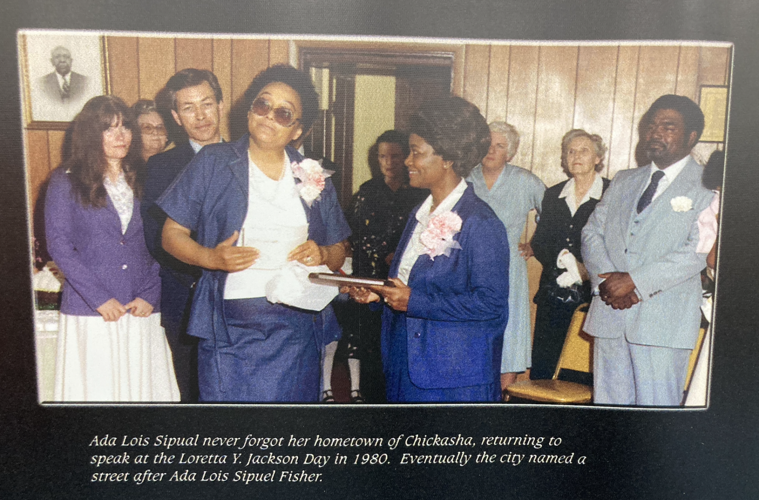 A picture from the display shows Ada Lois Sipuel Fisher at Loretta Y. Jackson Day in 1980. 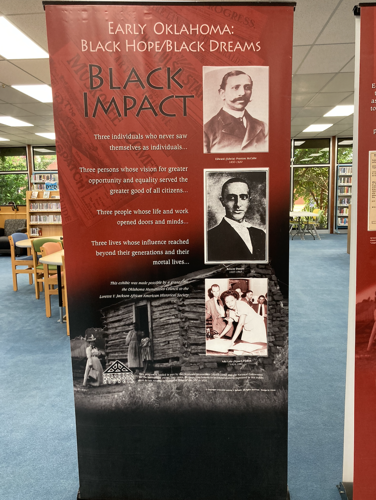 “Early Oklahoma: Black Hope / Black Dreams" will be on display at the Chickasha Public Library through the month of August. Library guests may also seek out the "Let's Talk About It" book display, which is located near this exhibit. 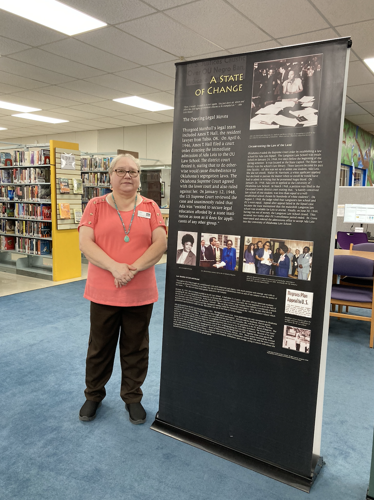 A picture from the display shows Ada Lois Sipuel Fisher at Loretta Y. Jackson Day in 1980.

“Early Oklahoma: Black Hope / Black Dreams" will be on display at the Chickasha Public Library through the month of August. Library guests may also seek out the "Let's Talk About It" book display, which is located near this exhibit.

An exhibit at the Chickasha Public Library explores the lives and impact of three Black Oklahomans.

The exhibit—which has traveled around the state of Oklahoma—carries a piece of Chickasha history. Chickasha native, Ada Lois Sipuel Fisher, is featured on the panels. There is a photo of Fisher speaking at Loretta Y. Jackson Day in 1980. The photo caption notes that a street in Chickasha was named after Fisher.  She may be best known as the first Black woman to be admitted to and graduate from the University of Oklahoma Law School.

Fisher’s success was hard won. An extensive legal battle preceded her attendance due to segregation laws. Even after that victory, Fisher was forced to follow segregation rules on campus, according to the Oklahoma Historical Society.

Edward (Edwin) Preston McCabe is also highlighted. He sought a place where Black citizens could establish their own towns, like other groups of Black Americans. He arrived in Oklahoma Territory in 1889.

Ruscoe Dunjee, was the owner of a 1915 newspaper called “Black Dispatch.” Dunjee was an advocate for issues that deprived Black residents of their human rights and dignity, according to Oklahoma History Center’s notes about the exhibit.

The exhibit will be on display at the Chickasha Public Library through the month of August.

The exhibit coincides with the library’s “Let’s Talk About It” book club program, which began on Aug. 5. Dr. Kalenda Eaton, professor of African-American Studies at the University of Oklahoma led a discussion on Edward P. Jones’ book, “The Known World.”

As the name of the program suggests, open discussion is encouraged.

The “Let’s Talk About It” program will meet from 6:30 to 8:30 p.m. on the first Thursday of every month through December. There will be a different speaker for each book, Lillie Huckaby, Chickasha Public Library Director, said. Guests are asked to register by calling the library at 405-222-6075. Refreshments will be provided.

Library patrons are encouraged to visit the “Let’s Talk About It” book display prior to the meeting. The display has 15 copies of each book that will be discussed. The intention is for guests to read the books before the meeting. For further reading, the display also includes books about the struggles of people who are of Indian and Asian descent.

The program is paid for through a matching grant from Oklahoma Humanities. The City of Chickasha and the Friends of the Chickasha Public Library supplement the matching funds.

Huckaby invites the Chickasha community to visit the library so they can see what the library has to offer and to provide feedback about what they would like to see. Huckaby said her goal for this fiscal year is to provide more educational programs suited for adults, which has been requested by library patrons.

Let’s Talk About It Program Dates and Titles:

October 6: “The Arc of Justice,” by Kevin Boyle, with discussion led by Dr. Lloyd Mussleman

Nov. 3: “A Plague of Doves,” by Louise Erdrich, with discussion led by Dr. Nyla Khan

Dec. 1: “Behind the Beautiful Flowers,” by Katherine Boo, with discussion led by Dr. Ken Hada