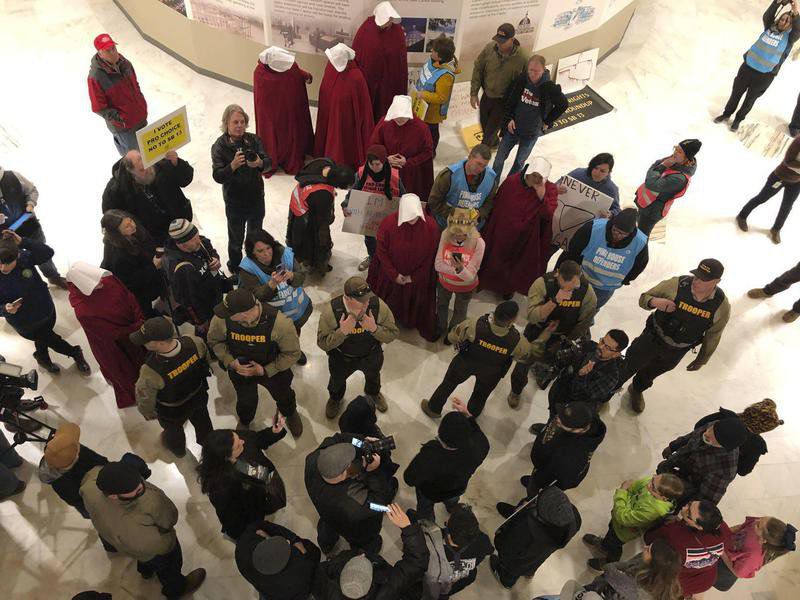 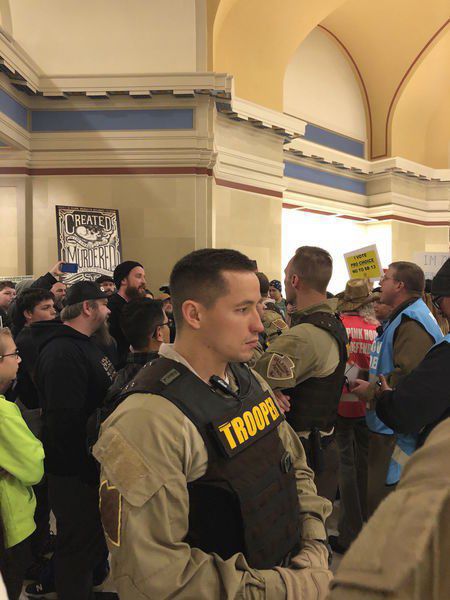 A few thousand anti-abortion abolitionists, meanwhile, rallied outside the Capitol, hoping to pressure lawmakers to pass legislation criminalizing abortion and classifying it as murder.

“They say that they’re here to fight abortion, but then we give them a bill to criminalize abortion, which would literally protect all human beings,” said Russell Hunter, a lobbyist with Free the States and organizer of the rally.

The Norman resident said lawmakers continue to allow Senate Bill 13 to languish without a vote. No other “pro-life” measures proposed by Oklahoma lawmakers will satisfy the growing abolitionist movement, he said.

“All the other (abortion) bills are substitute bills, regulatory bills,” Hunter said. ” All those other bills are just shams, fakes.”

Over the weekend, abolitionists armed with signs and bullhorns stood on street corners in Senate President Pro Tem Greg Treat’s northwest Oklahoma City district. They tried to garner constituent support for Senate Bill 13 in an apparent effort to press the Republican senator to hear the measure.

Treat said last week that he agrees with abolishing abortion, but doesn’t believe that specific legislation is the right way.

“If I thought that Senate Bill 13 would save a single human life, I would be on board fully,” Treat said last week ahead of the rally. “I still am of the mind that it’s fatally flawed, and I believe that in large part that’s a bill to secede from the union more than it is to save lives.”

Treat said the back half of the bill is about not allowing any representative to appear in federal court to defend the law. He said it contains “circular logic” that says if Oklahoma declares something constitutional, then it is constitutional.

“I believe Senate Bill 13 is much more focused on quasi-secession rather than saving human life,” he said.

“This is something that we’ve been praying for, that we’ve been working for for a long time, and we’re very close to accomplishing this goal,” said Brad Wagnon, of Tahlequah.

Wagnon, who has been involved with the abolitionist movement for at least seven years, drove 2.5 hours to attend the rally and advocate for Senate Bill 13.

“None of the other abortion legislation goes far enough,” he said. “Abortion is murder. Everybody knows it, and we’re here calling for the only bill that will codify abortion as murder in the state of Oklahoma.”

Inside the Capitol, tensions grew as a small group of abortion-rights supporters trying to hold their own rally clashed with abolitionists. Oklahoma Highway Patrol troopers lined up between the groups to deter violence as visitors and lawmakers stared.

Their chant of “Not the church, not the state, women will decide their fate” echoed through the Capitol.

“There are people that do not believe that outlawing abortion will make it go away and that women should have choices in their health care,” said attendee Susan Braselton, of Tulsa, who also serves as a coordinator for abortion clinic escorts.

Braselton’s team helps escort women into the Tulsa abortion clinic as protesters stand curbside and yell “shame,” “judgment,” “sinners” and “murderers” at them.

In a conservative state like Oklahoma, Braselton said she expects numerous legislative attempts to incrementally regulate abortion. Senate Bill 13 though is a “more flagrant” effort, she said.

“Women should be able to make a choice of whether they want to have kids or not,” she said. “All kinds of decisions go into having a baby, and I don’t think that it’s something politicians should decide for women.”

She said male politicians don’t give women credit for having the mentality to choose their future.

Julie Burkhart, founder and CEO of Trust Women, which runs an abortion clinic in Oklahoma City, said having safe and legal access to abortion care is vital because it allows women to decide if and when to have a family.

Nearly 70% of Trust’s patients already are parents, so when they visit the clinic, they already have decided that abortion is the best option, she said in a statement.

“Banning abortion would reduce a woman’s ability to live a healthy and productive life,” she said. “A large number of our patients come from areas with little to no access to reproductive health care. Patients travel hours to obtain abortion care. Oklahoma legislators should not insert themselves into people’s health care decisions. Taking away rights will bring harm to Oklahoma women.”

Stecklein is CNHI Oklahoma Capitol Bureau Chief for CNHI News Service publication newspapers. She can be reached at jstecklein@cnhi.com.