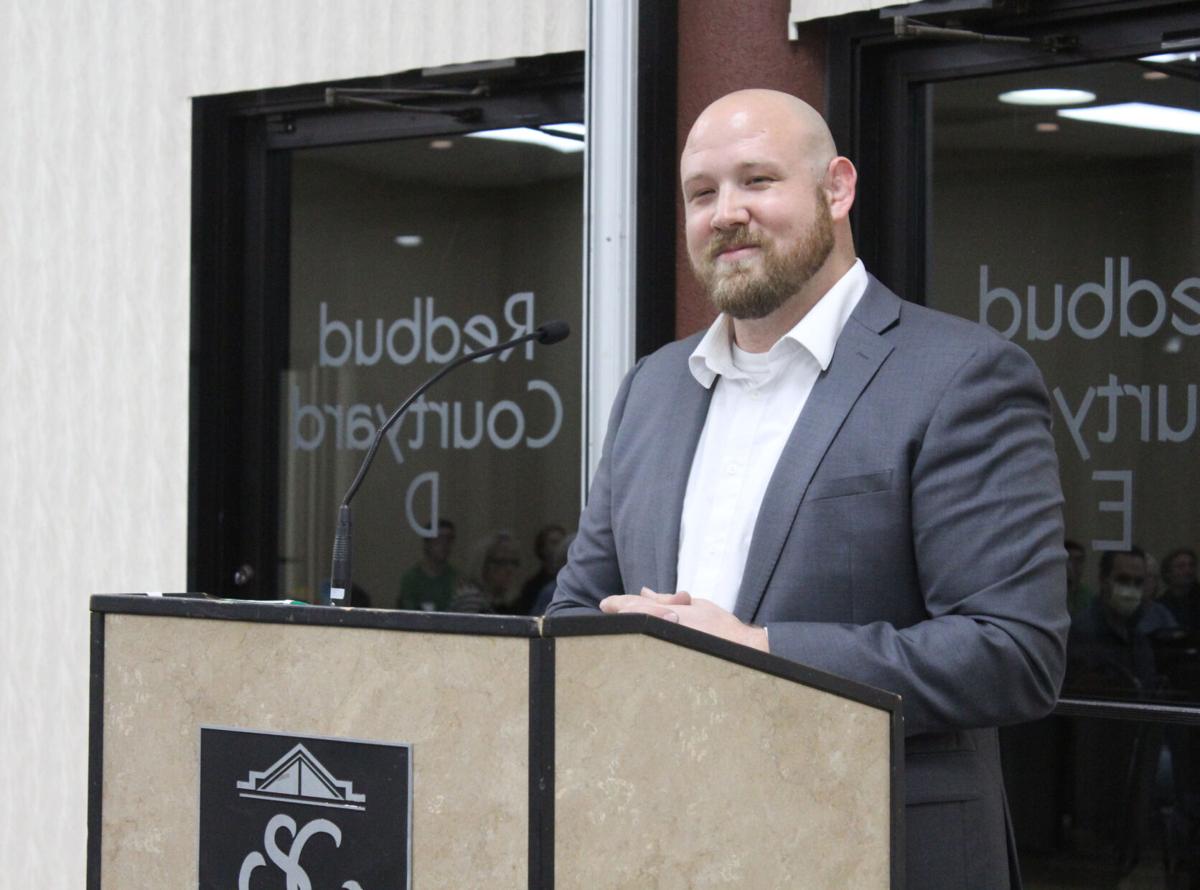 Josh Holler hosted his book release on Nov. 10 at The Simmons Center where he talked about and read a preview of his latest novel. 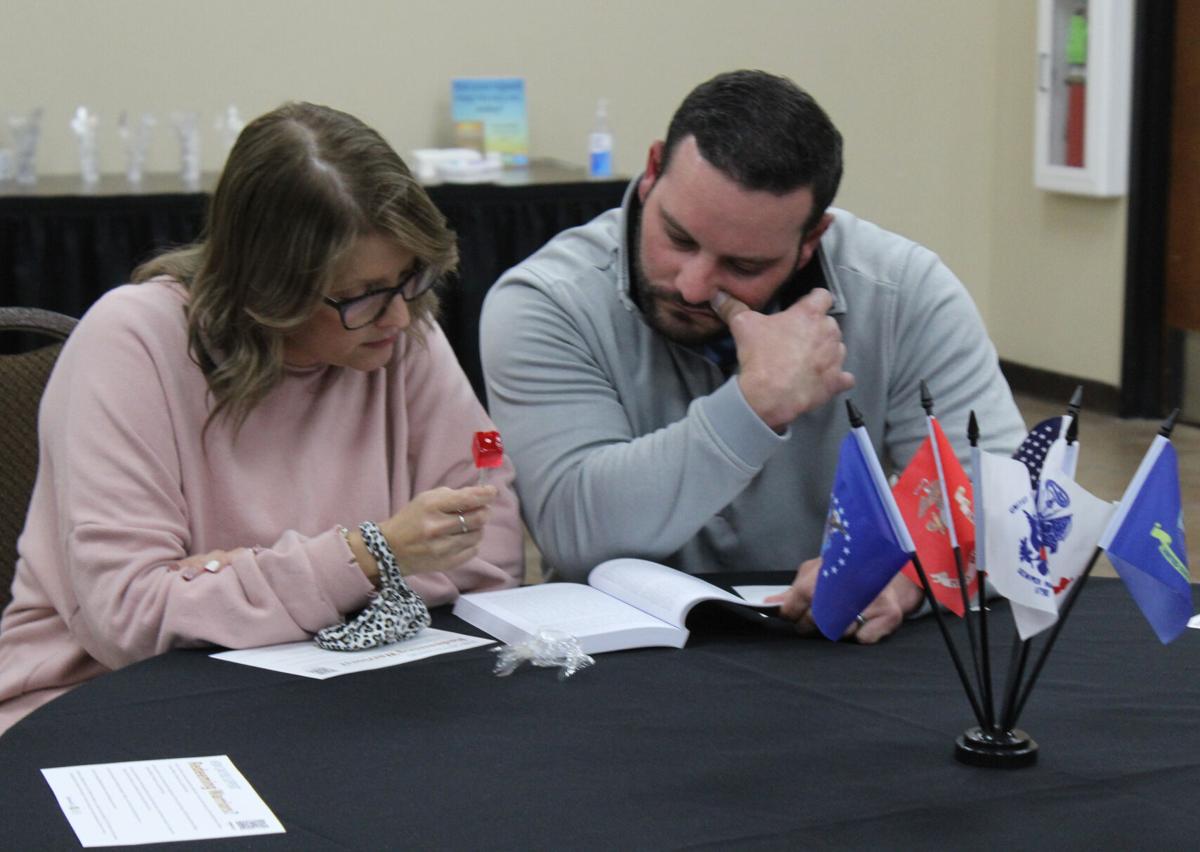 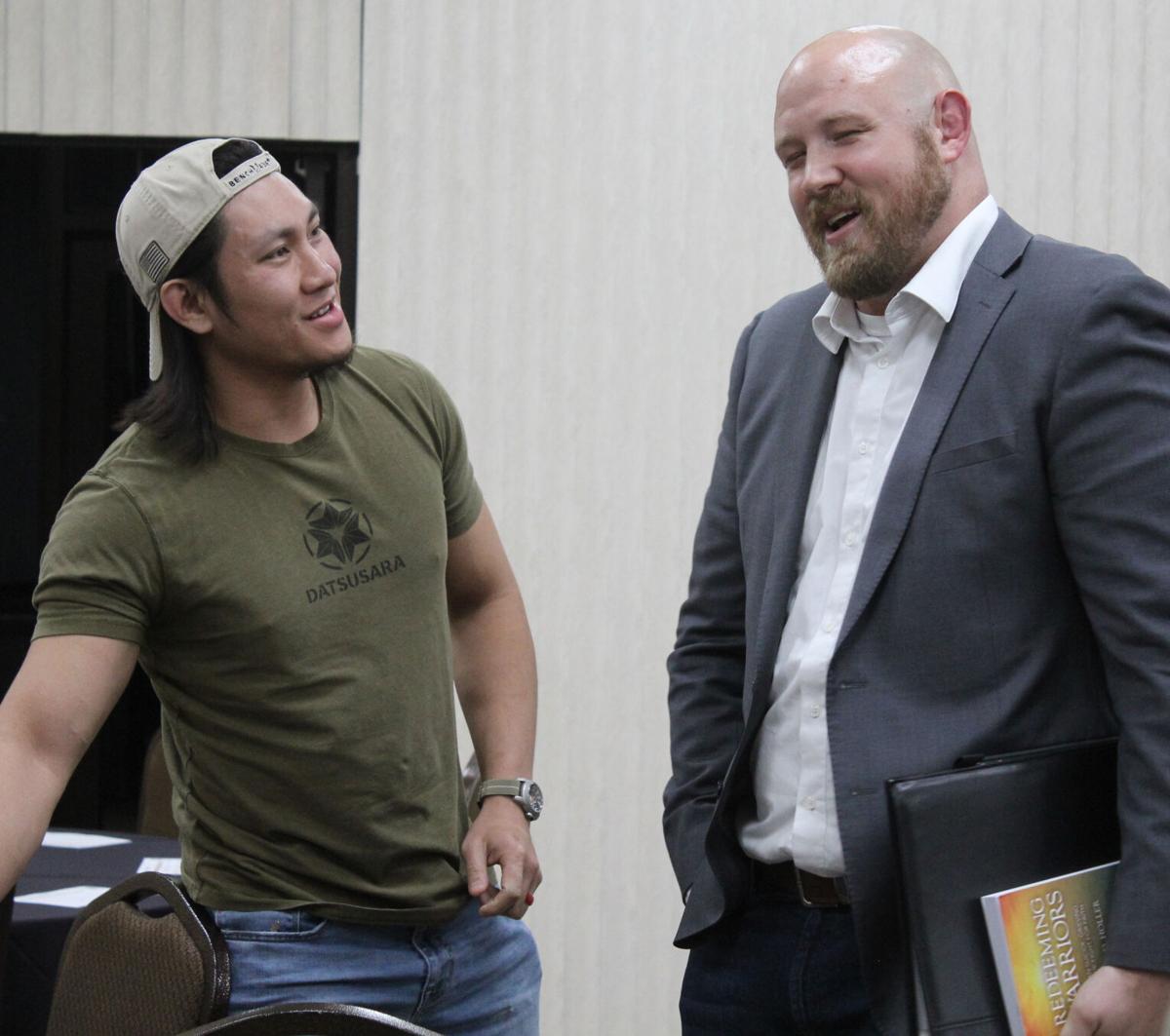 Josh Holler converses with a member of the armed services from whom he once served with. 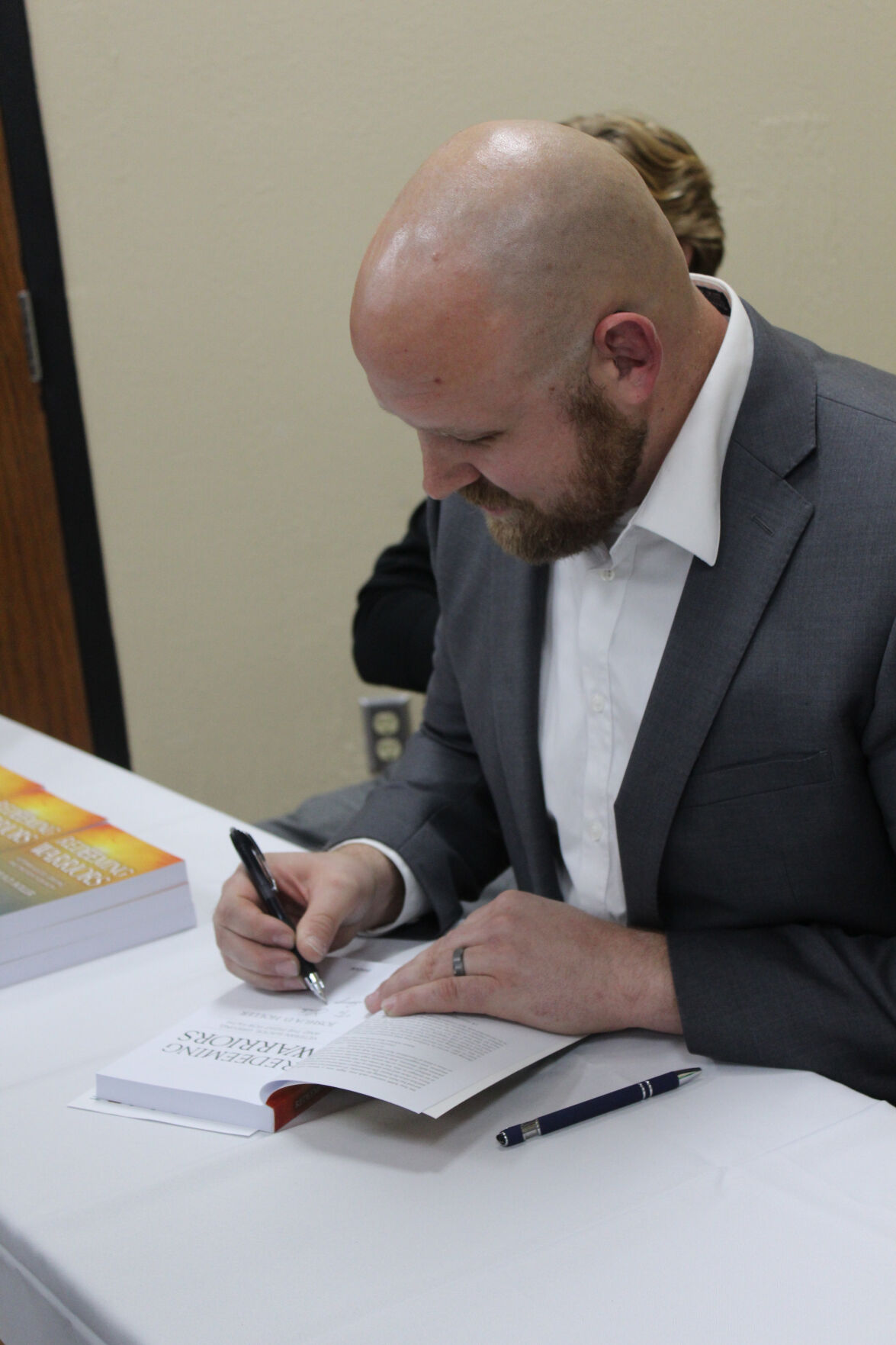 Josh Holler signs copies of his books during his book release on Nov. 10. 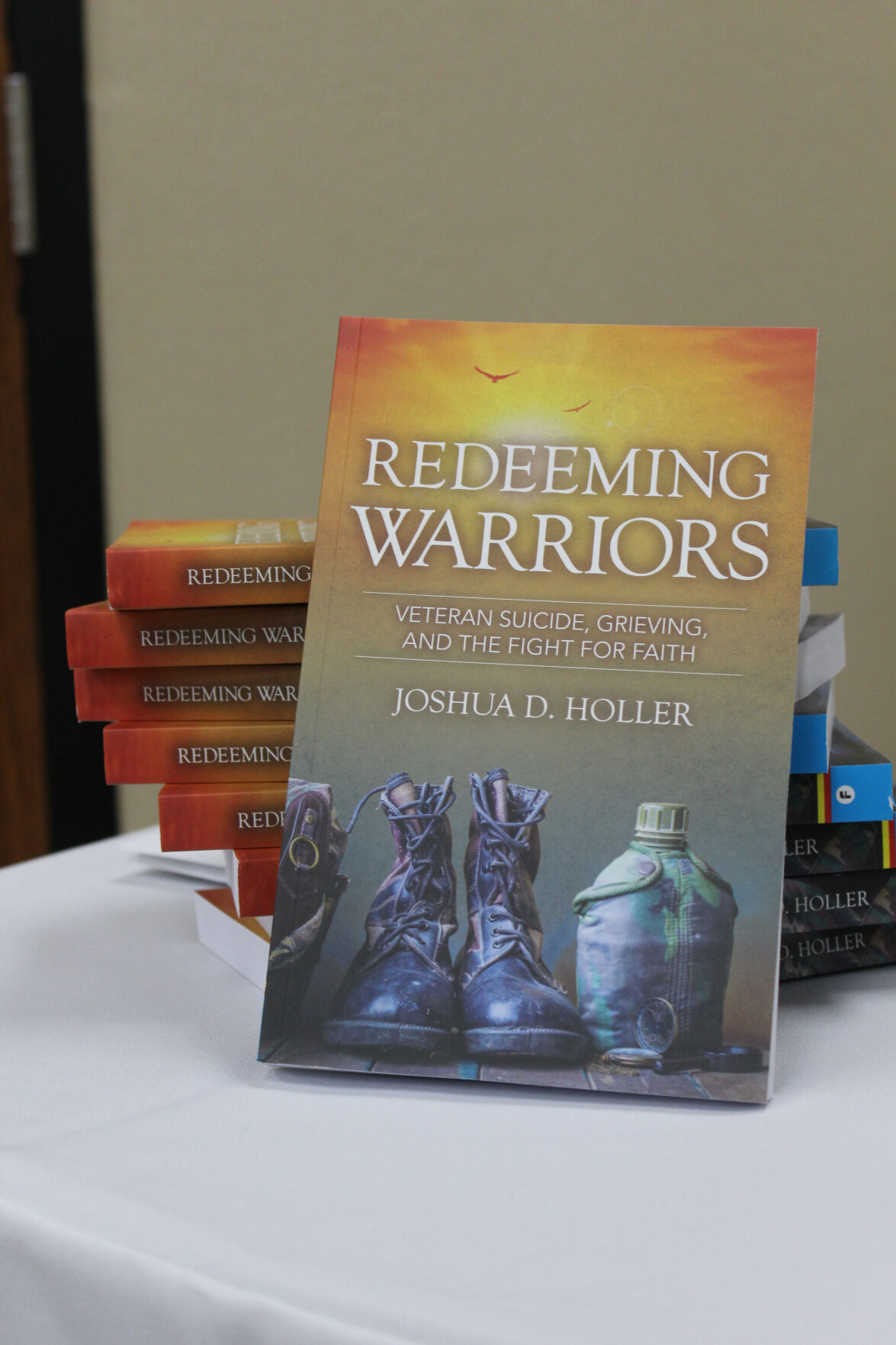 Josh Holler hosted his book release on Nov. 10 at The Simmons Center where he talked about and read a preview of his latest novel.

Josh Holler converses with a member of the armed services from whom he once served with.

Josh Holler signs copies of his books during his book release on Nov. 10.

A local pastor released his latest book dedicated to responding to those who served this country, just in time for Veterans Day.

Holler hosted his book release on Nov. 10 at The Simmons Center where he talked about and read a preview of his latest novel.

Holler said the importance of the date was on Nov. 10, 1775 — the day the Philadelphia Marine Corp was born.

According to Holler’s biography page, he served in the United States Marine Corps from 2006-2013 with 1st Battalion 7th Marine Regiment and deployed twice to Iraq between 2007-2009.

Holler attained the rank of Sergeant after spending time in the reserves with the 2nd Battalion 24th Marine Regiment before his honorable discharge in 2013.

Holler possessed several different motivations for the purpose for writing this book.

The first reason stuck Holler because he had an invested interest since losing many of his friends.

“Between my two deployments to Iraq and eight years in service, nine of the men I knew, trained, lived and fought with took their lives after coming home,” Holler said. “I wanted, in part, to tell their stories and invite people in to understanding some of the circumstances and context behind veteran suicide.”

Second, Holler said he wanted to address why veteran suicide is believed to be high and how it didn’t match his own experiences.

“Much of this is just telling stories of these guys I knew,” Holler said. “The reason they committed suicide, wasn’t because of their military service.”.

Holler said many of the veterans suffer from PTSD (post-traumatic stress disorder) and “the rate of suicide among veteran lies with those who have and have not had combat exposure.”

“We are led to believe that the vast majority of veteran suicides are born out of PTSD that results from combat exposure,” Holler said. “Though PTSD is serious, and though combat exposure does leave an indelible impression upon a person, it is neither PTSD nor combat that account for the majority of suicides.”

According to Holler, some of the guys he deployed with who committed suicide saw combat and some did not.

“This mismatch of my experience with the popular narrative drove my questions to investigate what the underlying causes really were,” Holler said.

Third, Holler saw there wasn’t much out there which addressed the issue of veteran suicide, as far as a book goes.

“There was a heavy emphasis in academic studies, but nothing accessible to the average person so I set out to make an attempt to fill this gap,” Holler said.

Holler said that as a community, there are many ways to come together to help and approach veterans who may be contemplating suicide.

“If we approach the problem of veteran suicide as something only the VA or trained professional trauma counselors can handle, then we will constantly outsource our relationships to the experts,” Holler said. “But the truth is, we are already equipped to do much of the work through the nexus of community hubs that foster virtues of community and relationships.”

Holler refers to “the church” when talking about the community hubs which are available.

“The work and mission of the local church through the individual members loving their neighbor will be more decisive for combatting veteran suicide,” Holler said. “(More) than all the money the government can throw at creating more programs or increasing access to mental health care.”

Holler said there’s about one out of every 17 people in America who are veterans.

“We have many of them in our communities and most know someone or experienced the loss of a loved one themselves,” Holler said.

Holler said a better question to ask veterans is why they joined and let them tell you their story.

According to Holler, the book shows the process of how to grieve and minister to those families in the midst of pain and despair.

The book is available to purchase on Amazon, Barnes and Noble and Christian Focus Publications.

Memorial services for James Eldon Rodgers, 74, of Chickasha, will be held at 11:00 a.m. on Monday, November 30, 2020 at the Ft. Sill National Cemetery in Elgin, Oklahoma. James Eldon Rodgers, known as Jim, was born November 16, 1945 in Montebello, near Los Angeles, California. He was the son…