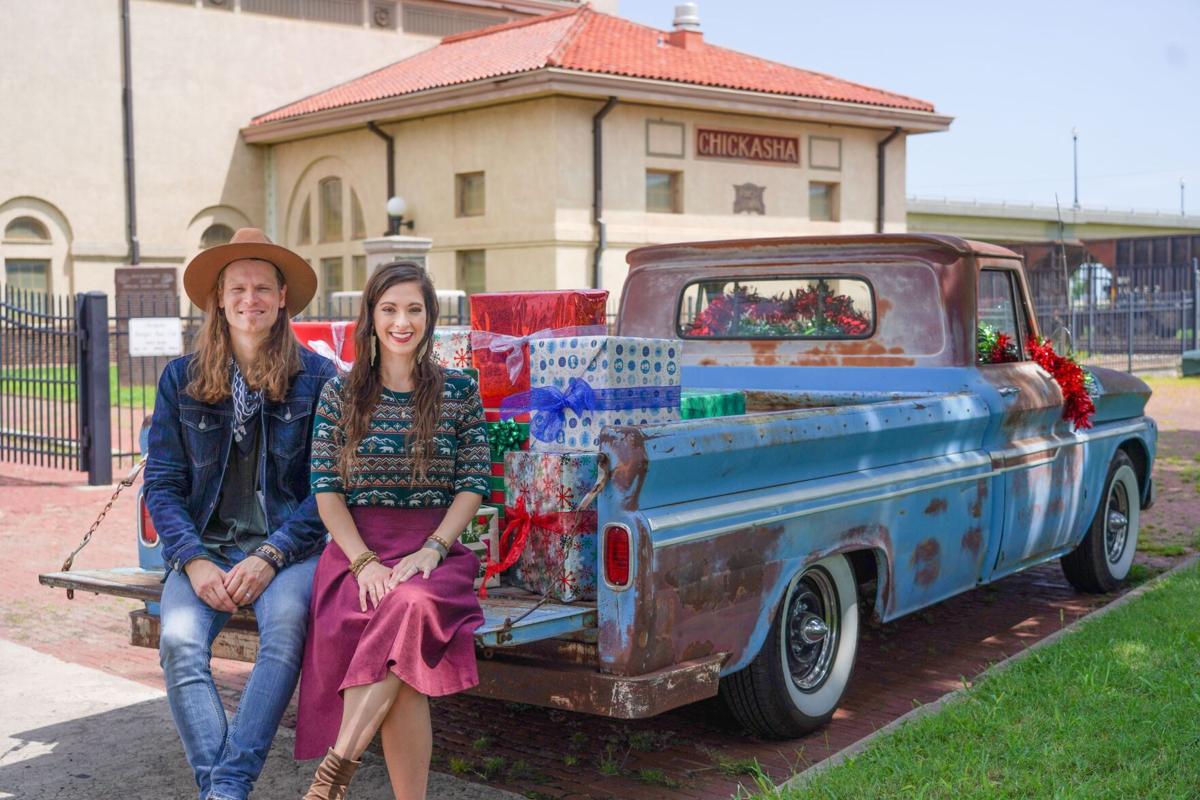 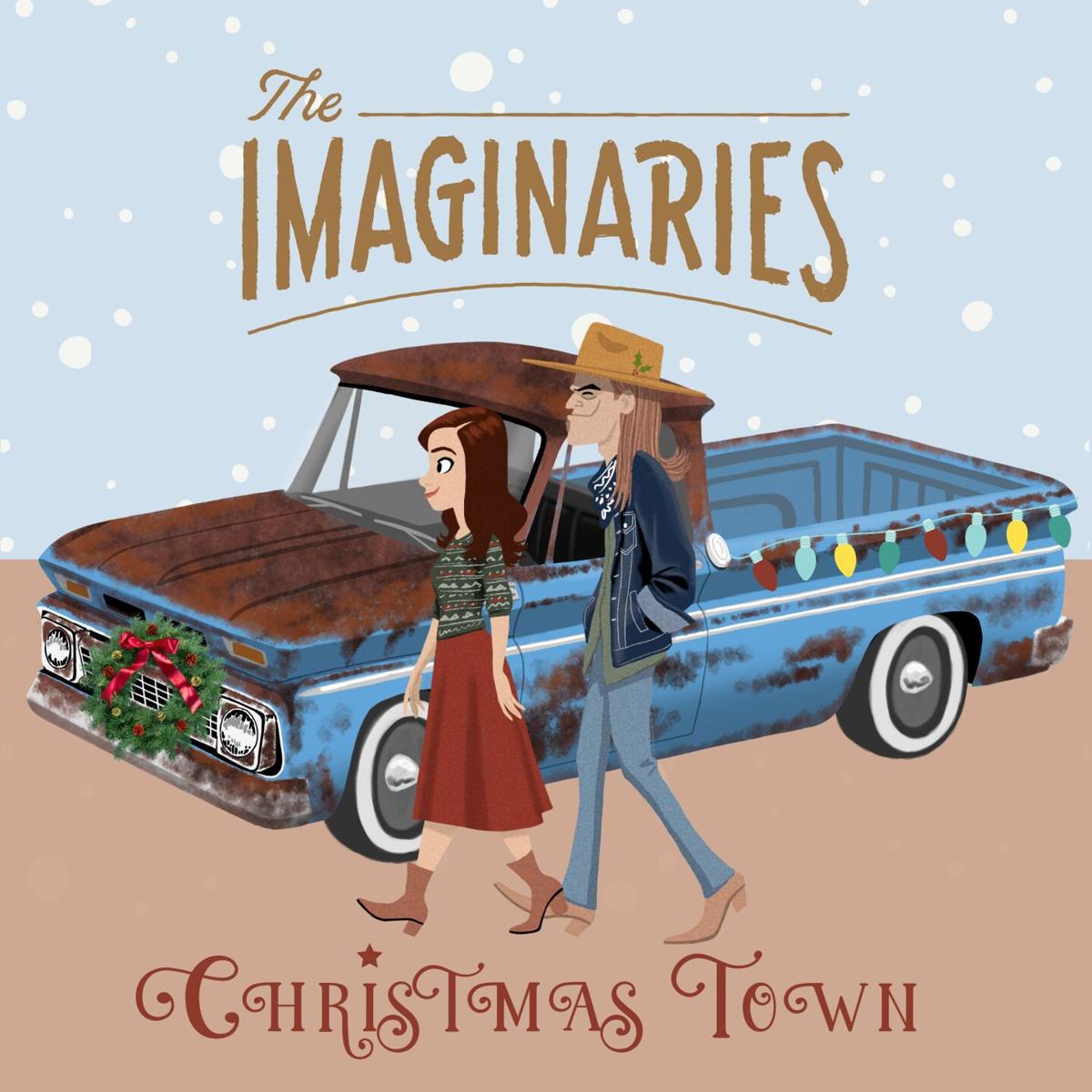 The Imaginaries’ have once again brought their creative vision to life in a new music video “Christmas Town.”

In the video, a girl wanders through the Dixie Building and discovers a “Christmas Town” board game. The layout is similar to Candyland, but instead of Princess Lolly or Mr. Mint, the board is filled with Chickasha landmarks. With a roll of the dice, a blue pickup game piece makes stops at the Rock Island Depot, Chickasha Soup Kitchen, Epworth United Methodist Church, Shannon Springs Park and the Washita Theatre.

The setting is Christmas in July. KFOR’s meteorologist Emily Sutton makes a cameo to report that the while the weather is hot, it’s Christmas in Chickasha.

The Imaginaries bring a snow machine to the Chickasha Public Pool, where Santa is the lifeguard. They drop off presents at the Chickasha Soup Kitchen. Then, McClure and Henry direct the choir at Epworth Methodist Church and later perform at the Washita Valley Theatre.

As with the Imaginaries’ previous video, “Hometown Christmas,” the video was shot entirely in Chickasha with Chickasha residents.

While there were a lot of moving pieces, the filming process was completed in two days. The video was directed by Reagan Elkins, of Intellego Media.

“It was all a result of dreaming big,” McClure said.

A key component of the video, the “Christmas Town” board game was brought to life by veteran Disney animator, James Lopez. McClure taught the Lopez children piano lessons while she and Henry lived in Los Angeles. Lopez has been credited in several iconic Disney films including The Lion King, Hercules and The Princess and the Frog.

The couple pitched their idea for the “Christmas Town” board game to Lopez, who turned the ideas into a rendering. Then, McClure and Henry had the rendering made into a decal, which they stuck onto a board game. While the process was tedious and a little pricey, they have toyed with the idea of selling the “Christmas Town” board game as a collectible next year. The Imaginaries say they are still gauging public interest in the project.

McClure and Henry say they have had a lot of conversations with Jim Cowan, Chickasha Economic Development Council Director, about his vision to brand Chickasha as a Christmas Town. The Festival of Light has made Chickasha a holiday stop for almost 30 years.

The Imaginaries partnered with the Chickasha EDC for the release of the video.

“The Imaginaries’ video showcases Chickasha as the true ‘Christmas town’ and all of the festivities that the city has to offer this time of year,” Cowan said in a news release. “The Imaginaries will always be a local favorite during the holidays, but we love that their music is heard all over the world too.”

The Imaginaries will perform after the Chickasha Lighted Christmas Parade on Chickasha Ave. on Dec. 4. The parade begins at 7 p.m. and will have more than 40 floats from local businesses and groups. At 8 p.m., the Imaginaries will perform at the Washita Valley Theatre and show a special screening of “Christmas Town.” Tickets are $10 and available here: https://www.eventbrite.com/e/the-imaginaries-christmas-town-chickasha-benefit-concert-screening-qa-tickets-196184000627 .

Because part of the spirit of Christmas is the spirit of giving. The Imaginaries are donating all proceeds from the Dec. 4 concert to the Chickasha Soup Kitchen and the Life Skills Institute.

The Imaginaries have two holiday concerts coming up in Oklahoma. On Dec. 11, at The Historic Dunkin Theatre in Cushing, OK's Broadway District, and on Dec. 17 at the Historic Roxy Theater in Muskogee, OK.  Tickets are available here: https://www.imaginariesband.com/#tour

It has been a big year for The Imaginaries. Like many performing artists, they had to cancel several shows in 2020. However, now the band say they are performing more than ever. They released their self-titled debut album in March 2021. (Click here for more information) Shortly after shooting the video for “Christmas Town,” they went on their album release tour in August.

Peter Gallagher and Bruce Campbell sing the song in the new Hallmark film “One December Night.” The movie will be shown on the Hallmark Movies and Mysteries series between now and Christmas. Click here: https://www.hallmarkmoviesandmysteries.com/one-december-night for showtimes.

The song also plays in the credits and trailer of the 2017 film “A Cowgirl’s Story."

Funeral service for Victor Dean Valdes, 77, of Chickasha, OK will be 2:00pm, Saturday, 11-27-2021, McRay Funeral Home chapel. Viewing will be Friday 9am-7pm. Interment will be in the Fairlawn Cemetery. Services with McRay Funeral Home.