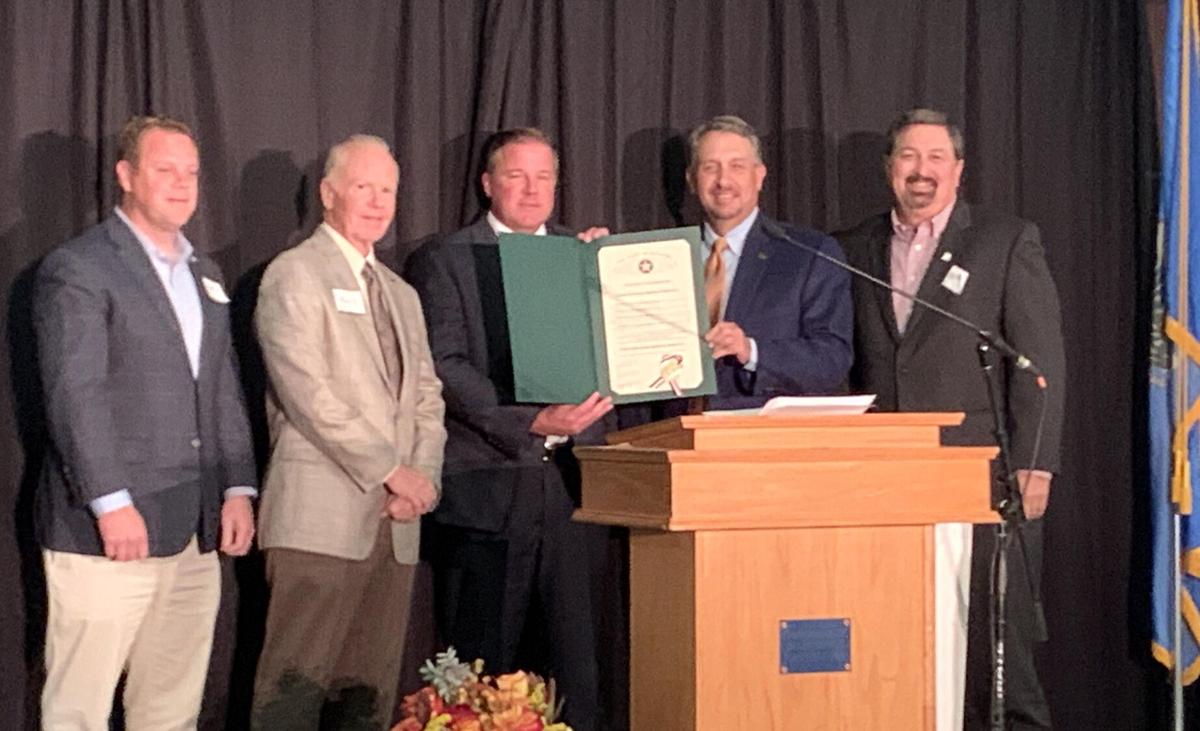 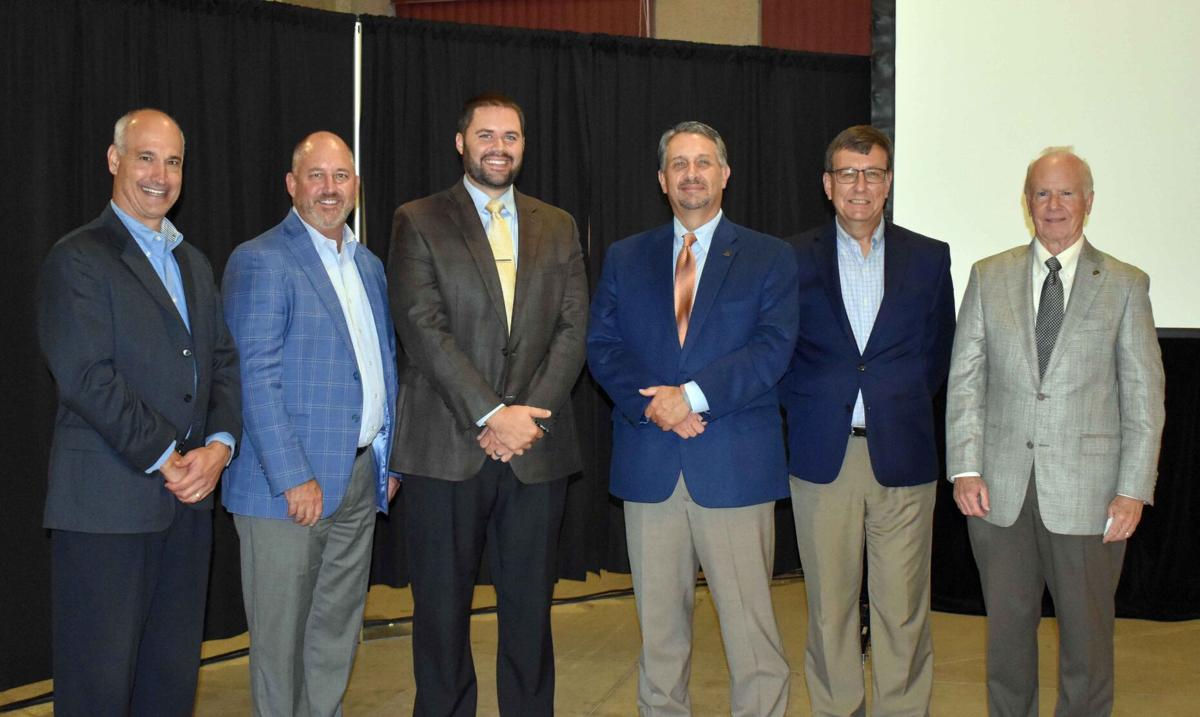 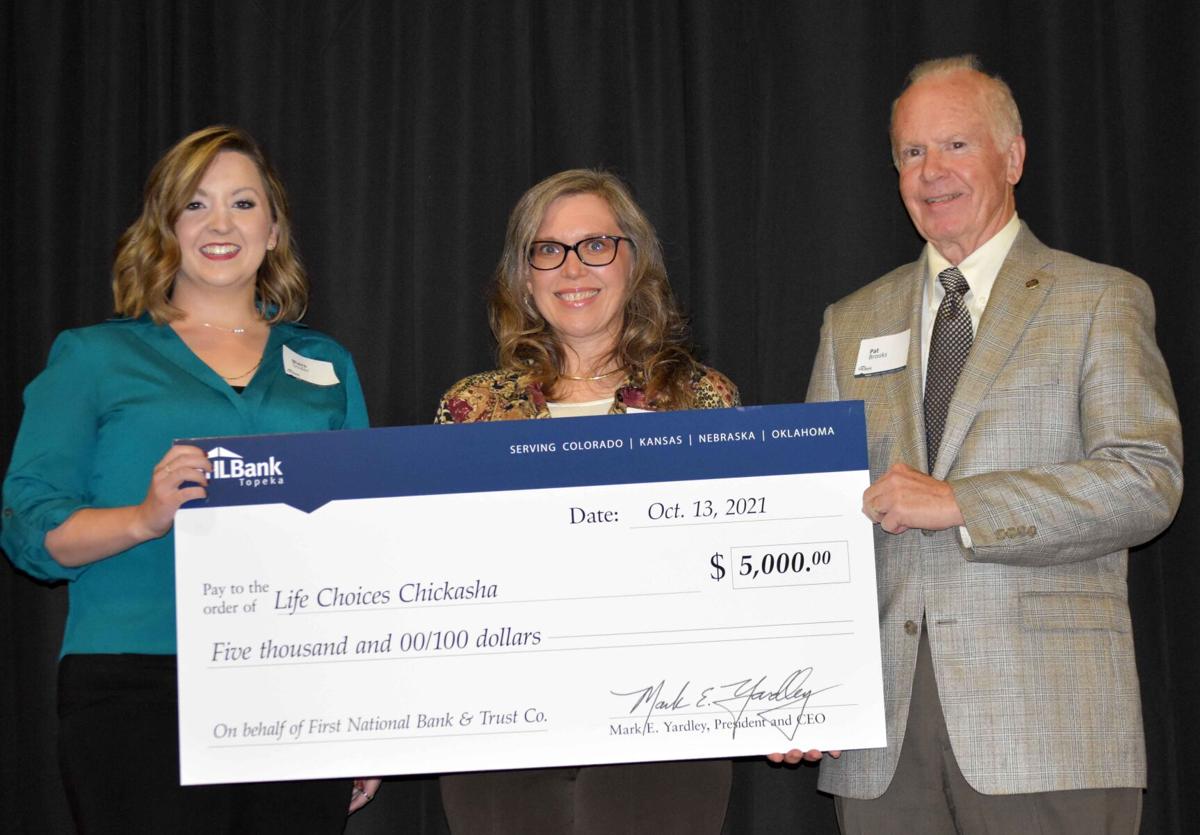 FHLBank leaders presented a $5,000 check to Life Choices Chickasha as a salute to First National Bank. Volunteer work with nonprofits, schools and community groups is a big part of FNBT’s reputation, said FHLBank leaders, so a donation to a charity serving and audience in need was part of the honor for FNBT bankers.  From left are Blaire Snider, Michelle Volante and FNBT Board Chairman Pat Brooks.

FHLBank leaders presented a $5,000 check to Life Choices Chickasha as a salute to First National Bank. Volunteer work with nonprofits, schools and community groups is a big part of FNBT’s reputation, said FHLBank leaders, so a donation to a charity serving and audience in need was part of the honor for FNBT bankers.  From left are Blaire Snider, Michelle Volante and FNBT Board Chairman Pat Brooks.

For its 129 years of service to community needs, bankers at The First National Bank & Trust Co. received a legendary salute – with documentary video – on Oct. 13 when the Federal Home Loan Bank of Topeka announced its annual Community Leader Award for 2021.

The award was announced twice in Oklahoma, first at an elegant Oct. 13 reception for stakeholders in Chickasha and then at a statewide bankers’ conference sponsored by the FHLBank in Oklahoma City the next day.

State legislators led by Sen. Lonnie Paxton presented a resolution honoring the bankers at FNBT for their work in building community life and economic development across central and southwest Oklahoma.

Adding to the honor, FHLBank presented a $5,000 cash award to Life Choices Chickasha as a salute to FNBT’s long record of service to nonprofits in the area.

“Tonight is a great honor,” said FNBT President & CEO John Gorton. “Every bank imagines itself as a community leader and a broker in building healthy communities.  This award, this recognition, is confirmation to the efforts of our bankers. Together we’re doing something right.  We’re living our mission – ‘to promote the success of our customers and communities.’”

The award was presented by FHLB President & CEO Mark Yardley, who brought more than a dozen bankers from Kansas to attend and coordinate the special events.

”We have partnered with FNBT since 1999 and are proud to recognize their vision and leadership with our 2021 Community Leader Award,” said FHLBank Topeka President and CEO Mark Yardley. “FNBT puts a great emphasis on supporting the people and places that power the communities they serve.”

A highlight of the evening was a 16-minute video with salutary comments and personal perspectives from customers, directors, bank leaders and Chickasha voices.

“It’s a lot easier on businesses when they have a community partner like First National Bank,” said Chickasha Economic Development Chairman Jim Cowen in the video, one of 17 interviews delivered in the artistic video project created by Indermaur Media of Rhode Island.

“We are pleased to salute FNBT stakeholders for the bank’s vibrant community engagement and solid community lending record, fueled in part by our partnership that has served your customers and communities in south-central Oklahoma for decades,” said Tamara Taylor, FHLBank communications director.

One of 11 locations across America, the FHLBank in Topeka serves nearly 700 banks across Oklahoma, Colorado, Kansas and Nebraska. Each year, the Federal Home Loan Bank salutes community banks that demonstrate praiseworthy leadership and service.

Gorton added, “On behalf of all of our bankers who work every day delivering high quality financial services, and on behalf of our directors who lead this institution with integrity and disciplined thinking, and on behalf of our executive team that works to set high standards and to ensure that we are a strong, safe financial institution, thank you to President and CEO Mark Yardley and the FHLBank team. This recognition confirms so much for us.”

Gorton saluted customers and local business owners.  “Most of all, thank you to our customers and business partners,” he said. “Your continued faith in FNBT is the fuel that powers our work and service.”