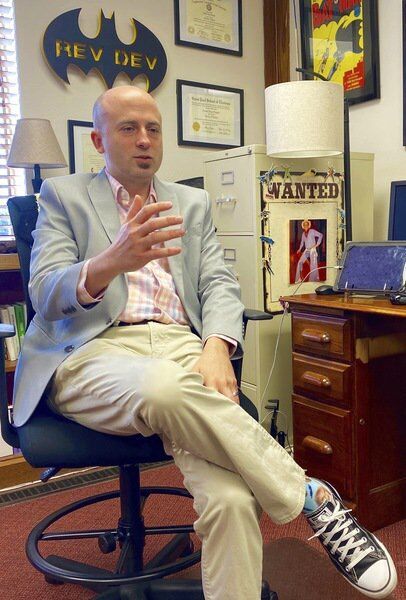 The Rev. Devon Krause, pastor at First United Methodist Church, gestures during an interview in his "bat cave" office. 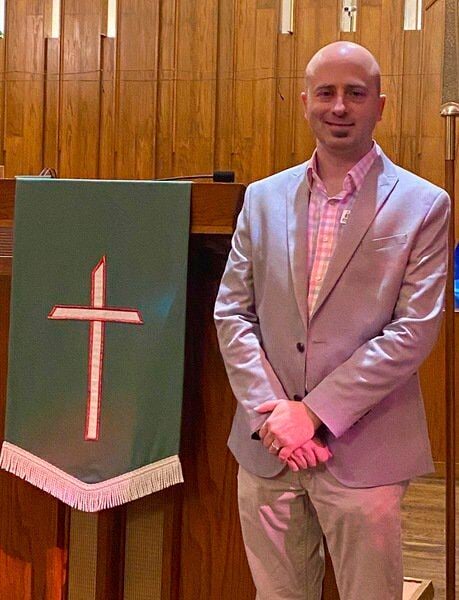 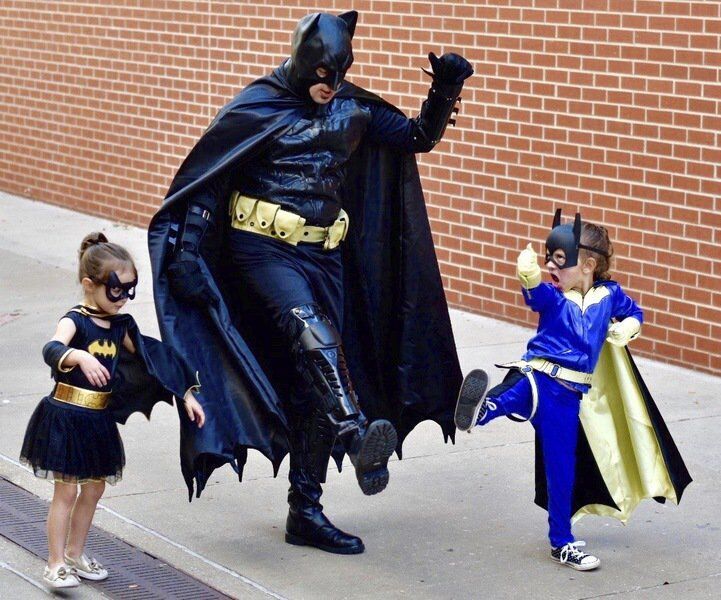 The Rev. Devon Krause, pastor at First United Methodist Church, enjoys a bat caper with his daughters, Audrey, 5, and Halle, 3. Costumes and theatrical flair have become commonplace since Krause took over the pulpit at the church in July.

The Rev. Devon Krause, pastor at First United Methodist Church, gestures during an interview in his "bat cave" office.

The Rev. Devon Krause, pastor at First United Methodist Church, enjoys a bat caper with his daughters, Audrey, 5, and Halle, 3. Costumes and theatrical flair have become commonplace since Krause took over the pulpit at the church in July.

ENID, Okla. — Step into the office of the Rev. Devon Krause, lead pastor at First United Methodist Church, and it's readily evident he is not your average pastor.

The "bat cave," as Krause refers to his office, is decked out, wall-to-wall, with Batman memorabilia, including a full "bat suit" — a fitting environment for a pastor with a flair for humor, suspense and stagecraft.

Krause, a former agnostic-turned-preacher, came in July to serve as senior pastor at First United Methodist Church, after previously serving there as youth pastor 2007-2012.

Krause completed his seminary studies at St. Paul School of Theology at Oklahoma City University, and married his wife, Lauran, during his first stint in Enid.

He then was transferred to serve in Elk City for five years, then in Norman for three years, before being called back to Enid.

Raised in Okeene, Krause said coming back to Enid was a natural fit for him and his family. He and Lauran now have two daughters — Audrey, 5, and Halle, 3.

"Enid is the place we went growing up," Krause said. "It was the place where anything was that was fun to do."

More importantly, Krause said coming back to First United Methodist Church gives him a chance to serve where he got his start as a pastor.

"This church has been an instrumental part of my growth as a Christian leader, and serving here was a great opportunity to form my skills as a pastor and to preach," Krause said. "I owe a lot to this church, and if I could come back here and give back, that was a true blessing."

Like many pastors, Krause felt the call to ministry at an early age. That call first came in the seventh grade, when he was influenced by a young pastor, straight out of seminary.

"I had never before had a pastor that young, who really spoke to my generation," Krause said.

But, the path to ministry had to overcome some obstacles along the way. By college, Krause said some negative experiences in the church had turned him agnostic.

He went to college at Southwestern Oklahoma State University in Weatherford, studying piano with plans of writing music for movies.

But, Krause said, "God had different plans in mind for what I was going to do."

"I thought I was studying piano for myself," he said, "but God had ideas for me to do something much bigger than myself."

What eventually brought him back to fully accept the church, he said, was a compassionate and loving environment that embraced his doubts.

"I was given the opportunity to ask some hard questions," Krause said, "and that's what really brought me back."

He now uses that experience to relate to both youth and adults who may believe in God or a supernatural authority, but have doubts about their faith, or concerns about organized religion.

"It helps me relate to them in a way I may not otherwise be able to," Krause said.

"I want people to ask the tough questions," Krause said. "We're taught doubt is the opposite of faith, but sometimes doubt leads to deeper faith.

"Oftentimes, we have questions and we leave, because we don't feel questions are welcome," Krause said. "But, we want people to stay and work through those questions with us."

His experiences also have given Krause an open and compassionate approach to people of other faiths.

"I always try to find ways to relate to people who are atheists or of other faiths," Krause said. "My goal isn't necessarily to get someone to believe what I believe, but to create a safe space where they can ask questions."

Krause's early passion for the movies also affects his style as a pastor, especially in his sermons.

Using a full arsenal of music, props, costumes and stagecraft, Krause said he tries to engage all of the senses in the worship experience, with some suspense thrown in for good measure.

The office space adjacent to his has become a storeroom of sorts, for a hodgepodge of props and sets, including a Roman centurion helmet, inflatable toys and an indoor playhouse.

People never know what to expect when they show up at the church door on Sunday morning, Krause said.

"I never want someone to come to church expecting what they're going to get," Krause said, likening churchgoing to a movie experience. "You don't want to go to a movie where everything is predictable."

Neal is health, military affairs and religion reporter and columnist for the Enid News & Eagle. Follow him on Twitter, @jamesnealwriter, and online at jamesrneal.com.
Have a question about this story? Do you see something we missed? Do you have a story idea for James? Send an email to jneal@enidnews.com.
Community