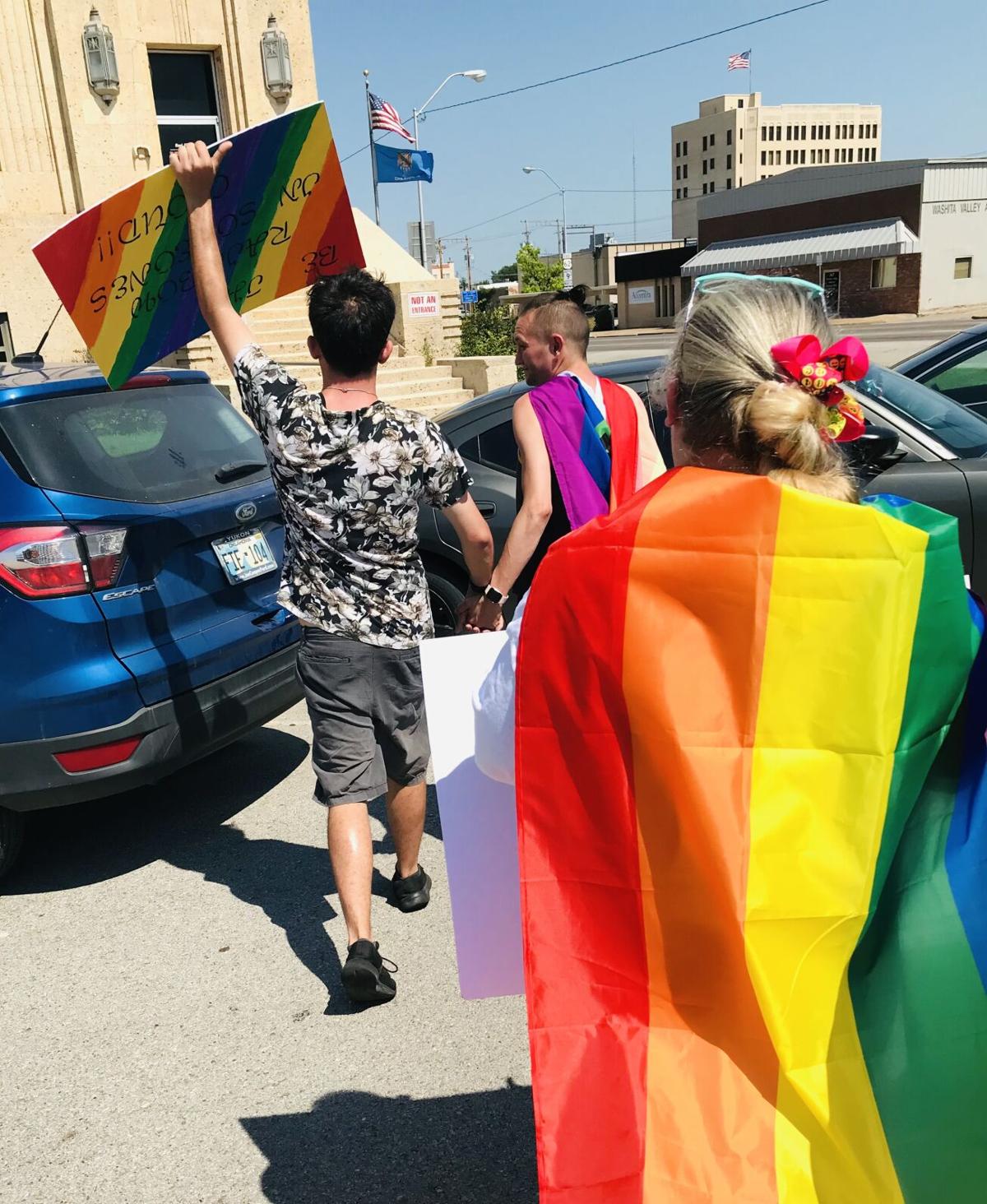 Stephens and Grady County Pride founders, Jacob and Bryan join hands on the way to a group photo at the Chickasha Pride Walk event. Just behind them, co-founder of Grady County Pride, Cheryl Browder is draped in a rainbow flag. The Pride Walk took place on June 20. Scroll through for more photos. 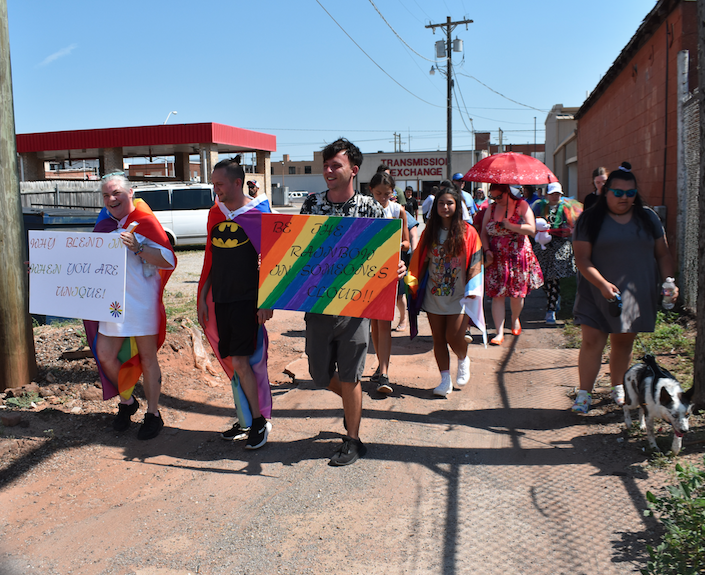 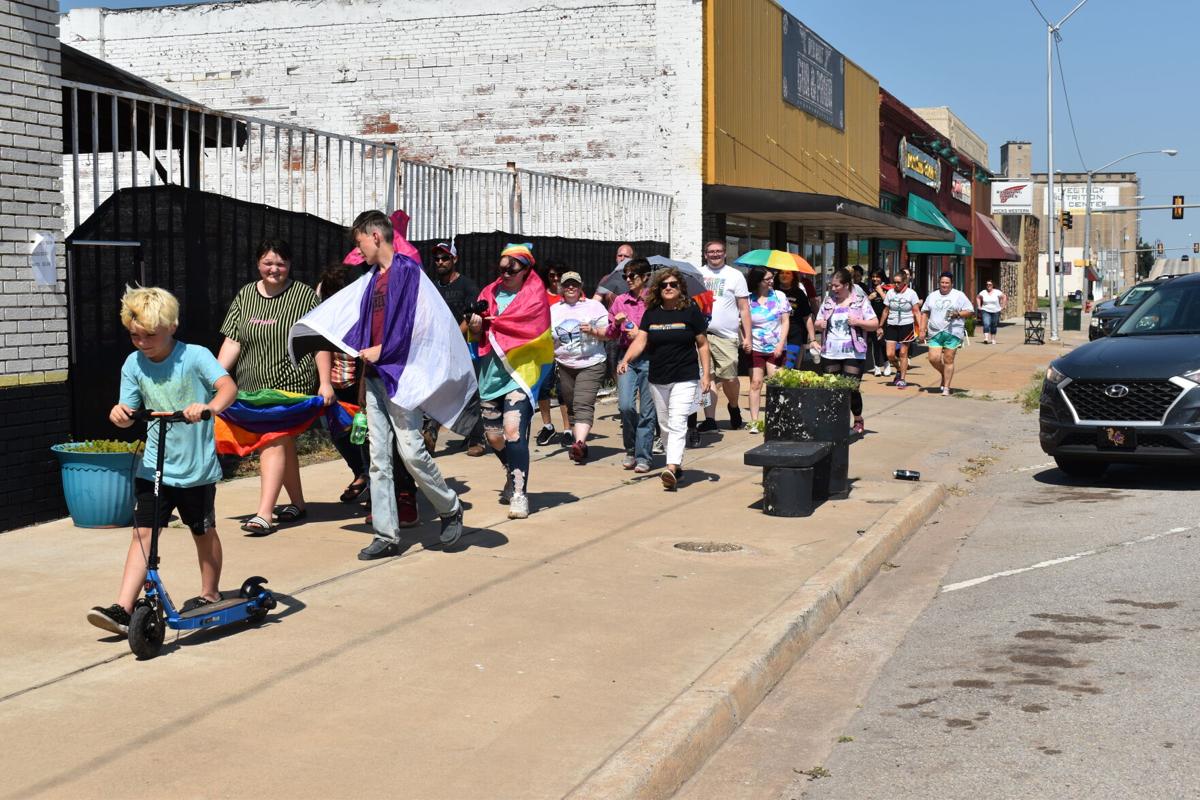 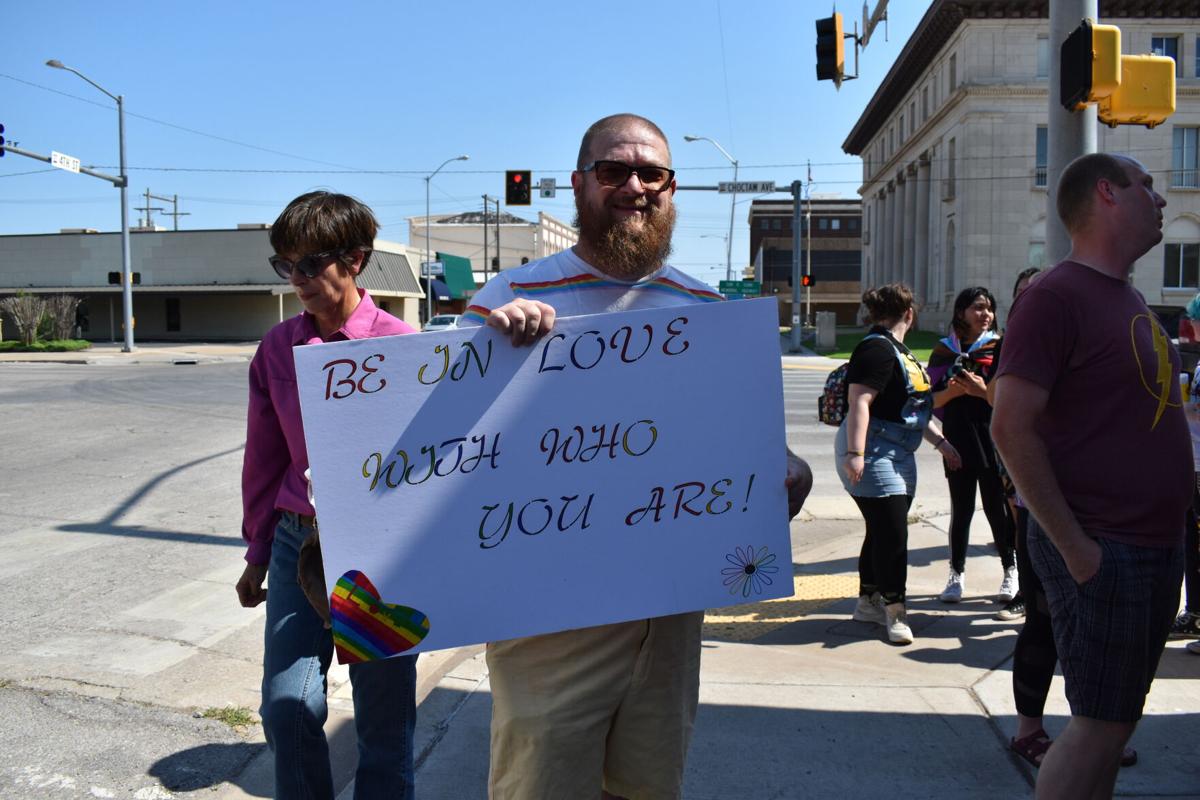 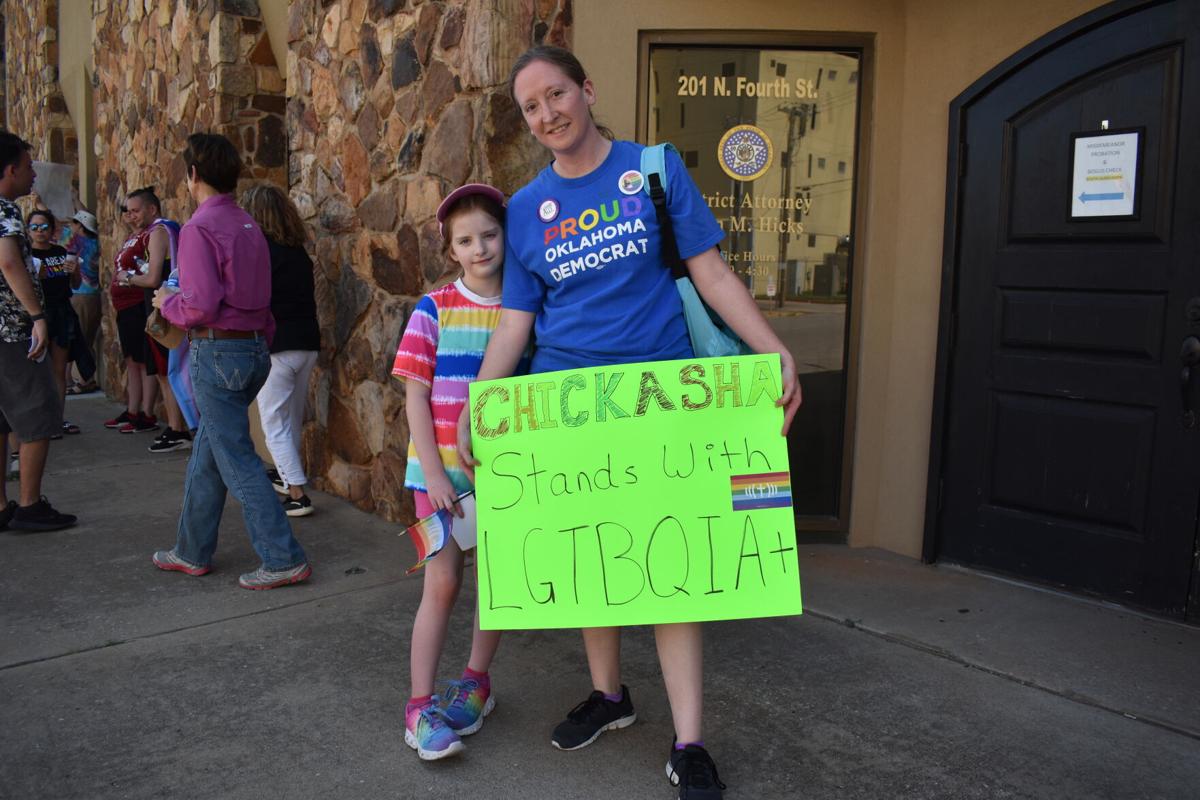 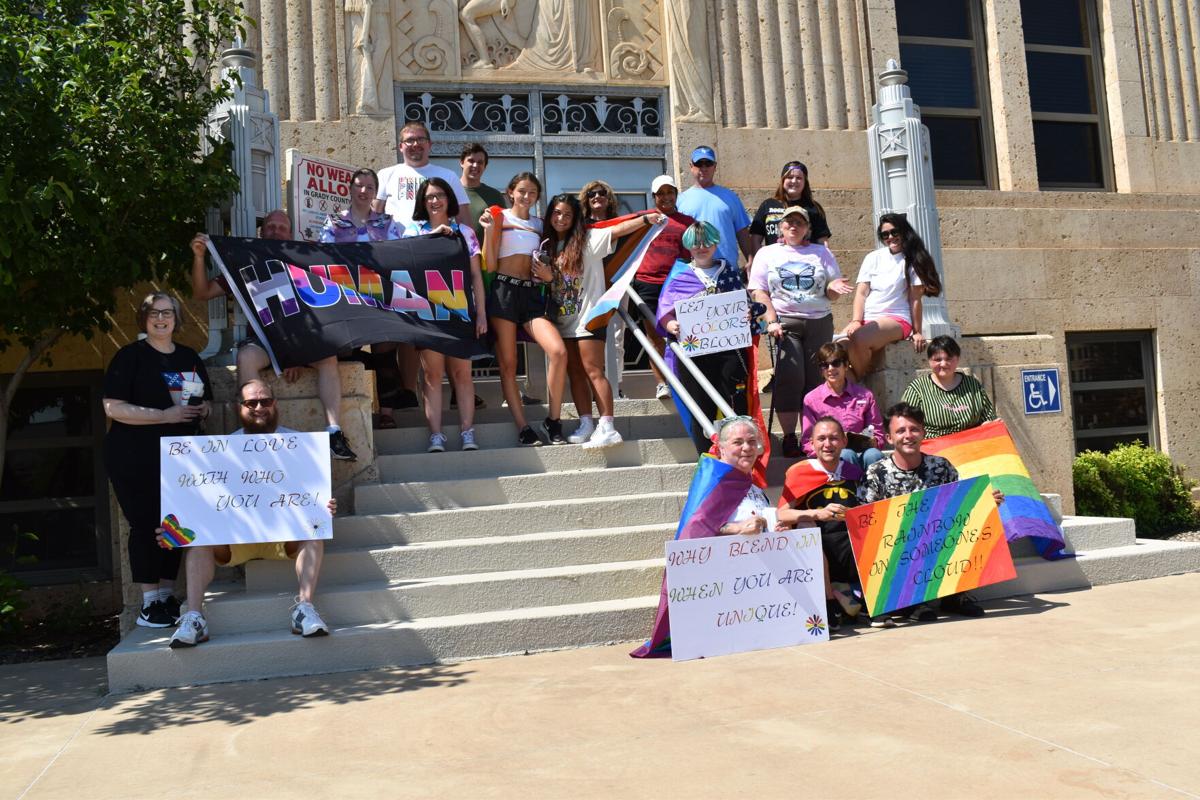 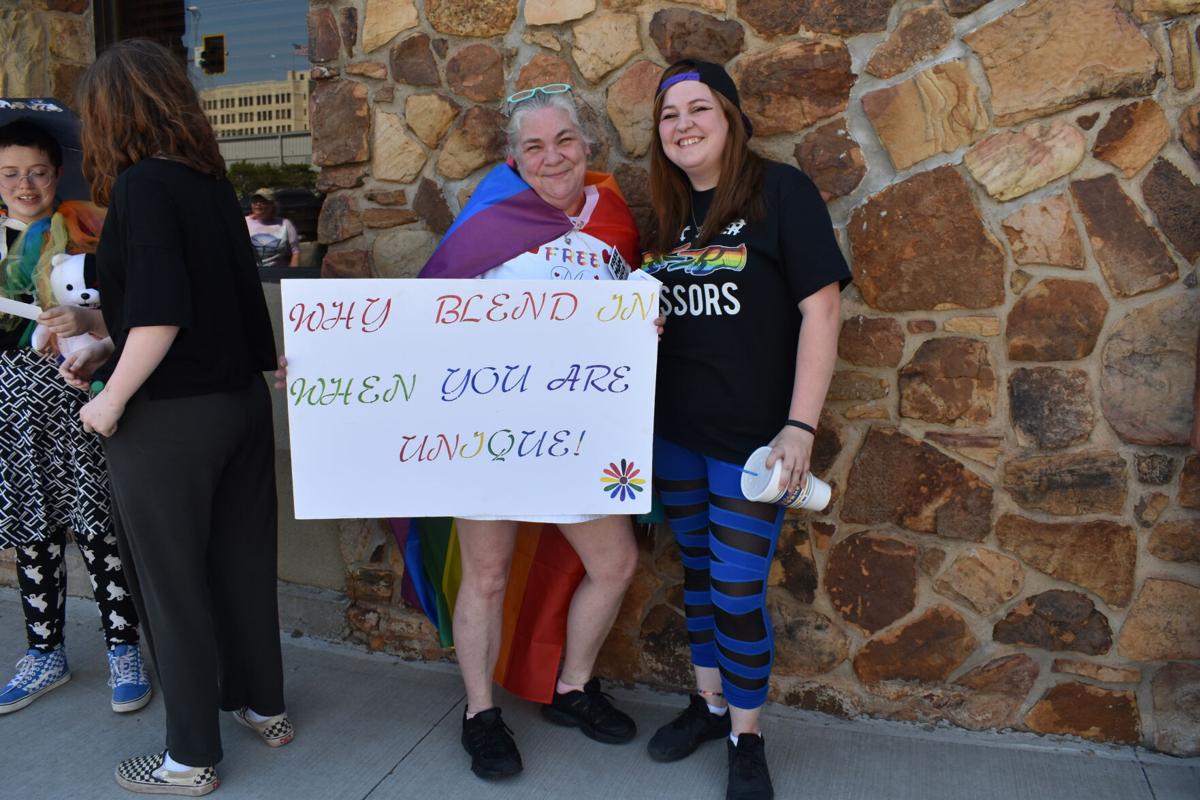 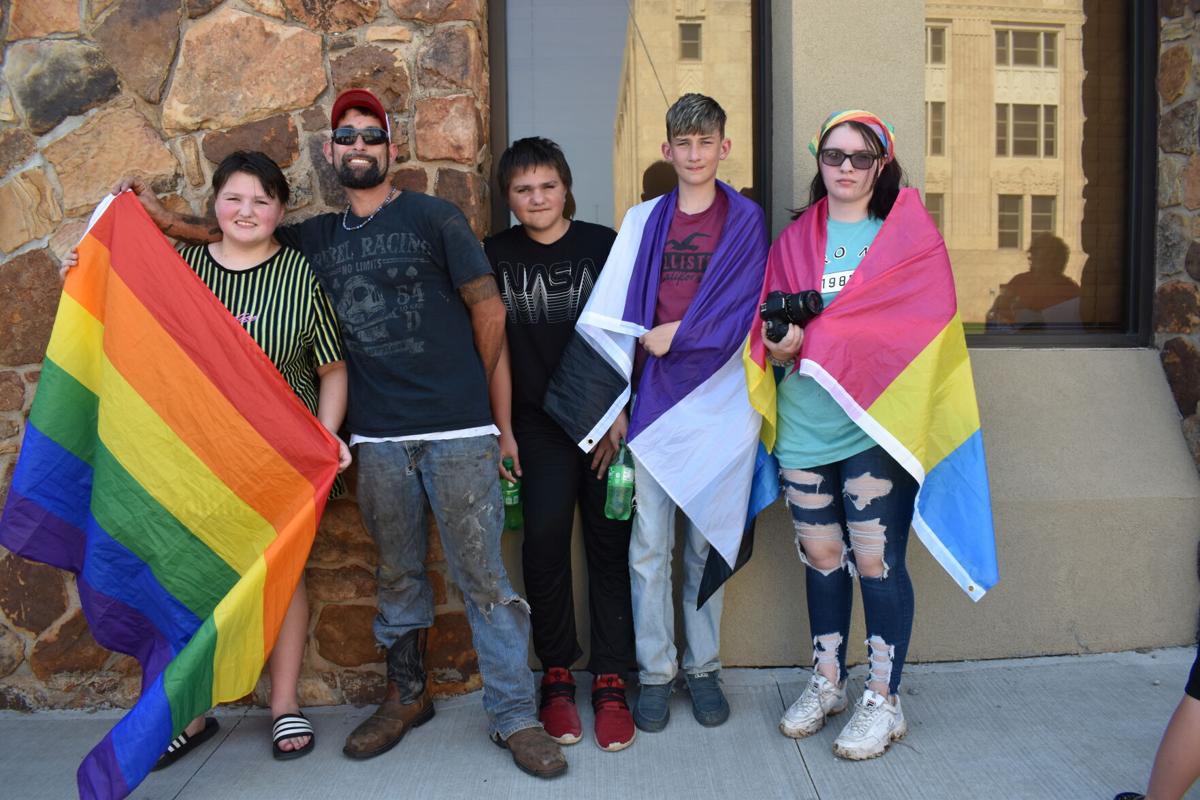 Stephens and Grady County Pride founders, Jacob and Bryan join hands on the way to a group photo at the Chickasha Pride Walk event. Just behind them, co-founder of Grady County Pride, Cheryl Browder is draped in a rainbow flag. The Pride Walk took place on June 20. Scroll through for more photos.

A group of people, some wearing or waving rainbow flags, met downtown on Sunday to be a part of Chickasha’s history.

The First LGBTQ+ Pride Walk took place on Choctaw Ave. on June 20. The walk started west of the Grady County Courthouse, and looped back around at the carwash on Choctaw Ave.

Stephens County Pride founders Jacob and Bryan have organized similar events in Duncan and Walters. They received requests from Chickasha residents to have a walk for their community. Together with Cheryl Browder, they founded Grady County Pride earlier this month.

“When it comes to equality. We have to set that tone. We have to set that pace. Today’s step in Chickasha is a huge movement,” Bryan said to the gathered crowd after the walk. He said the fight for equality applies not only to sexual orientation but also to age, disability and race discrimination.

“The rainbow is comprised of many colors and we can’t just pick one color to support,” he said.

Browder, who is also a member of Free Mom Hugs Oklahoma was at the event giving out mom hugs and notes of encouragement. She spoke about the impact of discrimination on LGBT+ youth and the importance of accepting people as they are.

“We have too many young people that are being shamed, discriminated against. They need to have pride in who they are,” she said. “Love is love” …”This is your life. There’s no need to be ashamed anymore.”

The crowd of about 30 people included couples, groups of friends and families supporting a loved one. Representatives from St. Lukes Episcopalian Church of Chickasha were also in attendance. The church provides marriage services for same-sex couples. Heidi Harrison with Heidi Helping the Homeless also came out to show her support.

“We were happy to. Helping the homeless, you don’t judge. It’s about love and not judge,” she said.

Jacob said he was pleased with the turnout and tone of the event. During the walk, cars honked their horns in support.

“I haven’t heard anything negative, but I have heard positive things, though,” he said.

He hopes to see the momentum continue.

“It shouldn’t be just about pride walk, it should be about celebrating our differences,” he said.

Grady County Pride will have another event next month. There will be a Pride Picnic at 6 p.m. on Aug. 7 at Shannon Springs Park in Chickasha.

Vivian Etta Tyler (Chastain), passed from this life on Tuesday, October 12, 2021 at her home in Chickasha, Oklahoma. She was born on June 29, 1955 in Jacksonville, North Carolina to Manley and Donna Chastain, while Manley was stationed there in the military. As a child of a service member th…