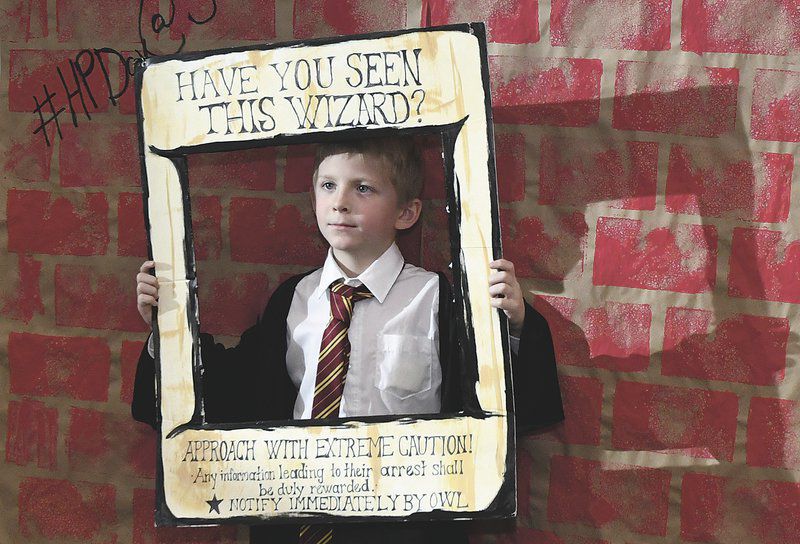 Eight-year-old Edward Seavy pauses in the middle of a scavenger hunt to have his picture taken during Harry Potter night at the Joplin Public Library in 2018. The "Harry Potter" movies will be popular go-to movies for families at home during the pandemic over the next month or so. Globe | Laurie Sisk 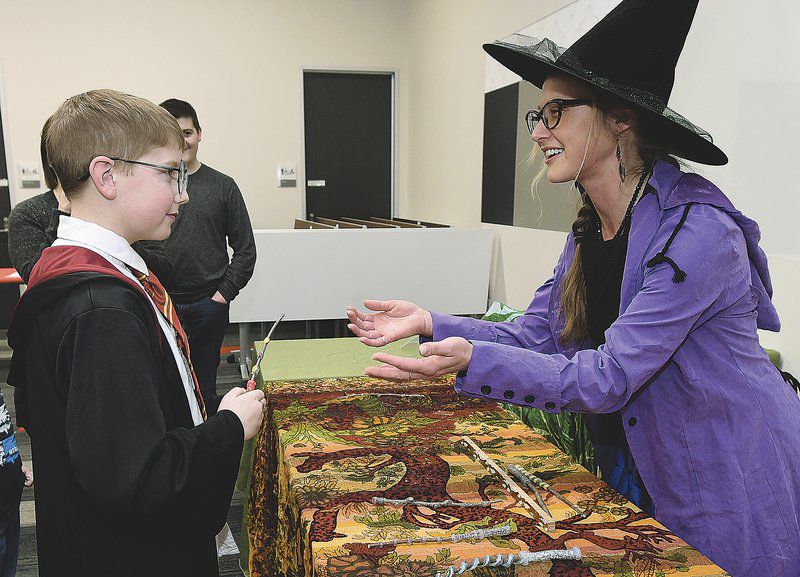 Nine-year-old Mason Briley gets a wand from Shelley Keezer, assistant at the Joplin Public Library's children's library during a Harry Potter Celebration Day. Harry Potter movies, either on streaming services, owned, purchased through Amazon or rented from Redbox, are go-to movies for many during the next month. Globe | Laurie Sisk

Eight-year-old Edward Seavy pauses in the middle of a scavenger hunt to have his picture taken during Harry Potter night at the Joplin Public Library in 2018. The "Harry Potter" movies will be popular go-to movies for families at home during the pandemic over the next month or so. Globe | Laurie Sisk

Nine-year-old Mason Briley gets a wand from Shelley Keezer, assistant at the Joplin Public Library's children's library during a Harry Potter Celebration Day. Harry Potter movies, either on streaming services, owned, purchased through Amazon or rented from Redbox, are go-to movies for many during the next month. Globe | Laurie Sisk

Looking for a few binge-worthy television shows to watch as your self-quarantine continues? Here are a few Netflix favorite shows, as selected by readers.

• "Harry Potter" film series: This would be a good time to finally watch — or again watch — everyone's favorite saga about a beloved boy wizard. The eight fantasy films, beginning with "Harry Potter and the Sorcerer's Stone" from 2001 and ending with 2011's "Harry Potter and the Deathly Hallows — Part 2," are some of the highest-grossing films of all time.

• "Call the Midwife": This is BBC period drama about a group of nurse midwives working in the East End of London in the late 1950s and 1960s. It often tackles a wide range of topics.

“The characters are full of humor, personality and compassion,” said Melinda Stotts, of Miami, Oklahoma. “It makes me laugh and cry.”

• "The Crown": This historical drama about the reign of Queen Elizabeth II was created and principally written by Peter Morgan for Netflix. It grew out of Morgan's film "The Queen" (2006) and his stage play "The Audience" (2013). It focuses on Queen Elizabeth’s life from her courtship with Philip to her long-lasting rule into the 21st century.

“I’m fascinated by the monarchy in England,” said Marea Breedlove, of Grove, Oklahoma. “The story starts before Queen Elizabeth was crowned and it follows her life and the struggles of not only her but her family. It hooked me in very quickly, and I couldn't wait to see the next one. The story of her sister Margaret was incredible.”

• "Lilyhammer": A New York mobster goes into hiding in rural Lillehammer in Norway after testifying against his former associates.

“It’s a quirky black comedy-drama,” said Scott Charton, from Columbia. “If you loved Steven Van Zandt as Mafia consigliere Silvio Dante in 'The Sopranos,' you’ll like him as a New York mobster who relocates to Lillehammer, Norway, through the federal Witness Protection Program. His hijinks assimilating into Norwegian culture while establishing his assumed identity as a creative ‘entrepreneur’ are weird and funny.”

• "Longmire": This is an American modern Western crime drama television series developed by John Coveny and Hunt Baldwin. Based on the Walt Longmire Mysteries series of novels by Craig Johnson, the show centers on Walt Longmire, a sheriff in fictional Absaroka County, Wyoming. He is assisted by staff, friends and his daughter in investigating major crimes within his jurisdiction.

“The videography is amazing,” said Dana Gray, who lives in Claremore, Oklahoma. “The characters are deep and brilliantly played by a talented cast, and the writing is crisp. The series has been lauded for its portrayal of Native American culture.”

• "The Great British Baking Show": The show follows the trials and tribulations of amateur bakers whose goal is to be named the U.K.'s best. Each week, the bakers tackle a different skill, the difficulty of which increases as the competition unfolds. Skills tested include cakes, breads, pastries and desserts, with a winner crowned after 10 weeks of competition.

“The contestants are so kind and encouraging to each other,” said Shelli Grant, of Siloam Springs, Arkansas. “It is clean, innocent entertainment. I learn new baking techniques and British names for ingredients and kitchen tools and I learn about a slew of baked goods I've never heard of.”

• "The Tudors": This historical fiction television series is set primarily in 16th-century England, focusing specifically on the reign of King Henry VIII. A collaboration of American, British and Canadian producers, it was created and written by Michael Hirst and filmed mostly in Ireland.

“I’m a bit of a history buff, so (historical fiction) tends to grab my attention,” said Sandy Fitch, who lives in Bentonville, Arkansas. “They bring a new perspective to the era or topic I didn’t know before. Most aren’t too bloody. I’ve watched the Tudors through twice.”

• "The Umbrella Academy": This American superhero series based on the comic book series published by Dark Horse Comics. It revolves around a dysfunctional family of adopted sibling superheroes who reunite to solve the mystery of their father's death and the threat of an impending apocalypse.

“(It’s about) kids with superpowers all grown up with dysfunction yet love wins,” said Martha Taylor, of Little Rock, Arkansas. “The kids who were gathered together — all born on the same day but to different mothers — to create The Umbrella Academy. They are trained by their ‘father’ to know and use their powers to do good. Now all are adults with differing perspectives about their childhood. They have all gone in different directions until a death brings them together as well as a crisis that requires them work together again. The fun of a superhero series but brings humanity and complexity to each character.”

• "Violet Evergarden": Based on a Japanese light novel series by Kana Akatsuki and illustrated by Akiko Takase, the story revolves around Violet Evergarden’s journey of reintegration back into society after a war, and her search for her life's purpose.

• "Virgin River": Based on the Virgin River novels by Robyn Carr, the story follows Melinda “Mel” Monroe, who moves to the remote California town to serve as a midwife and nurse practitioner. It is a Netflix original show.