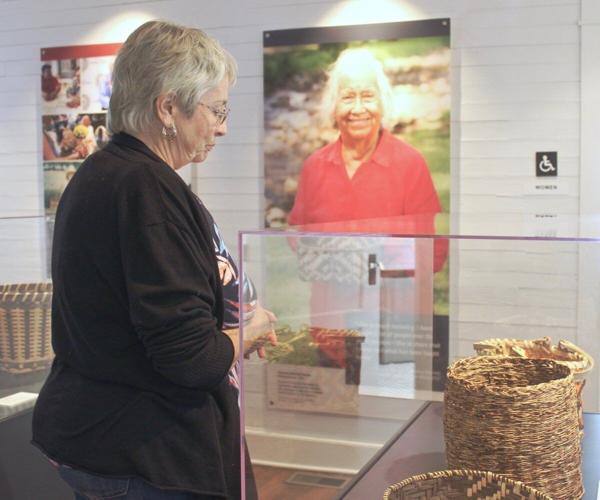 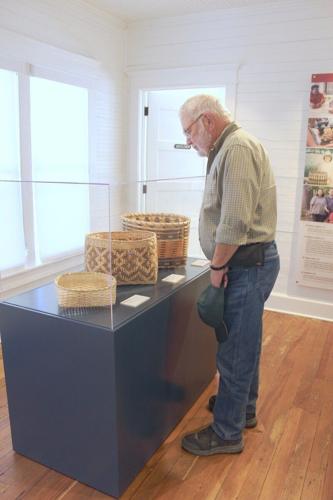 Ben Karleskit, who lives "over by Inola," visited the Saline Courthouse Museum on Oct. 14 with his friends. 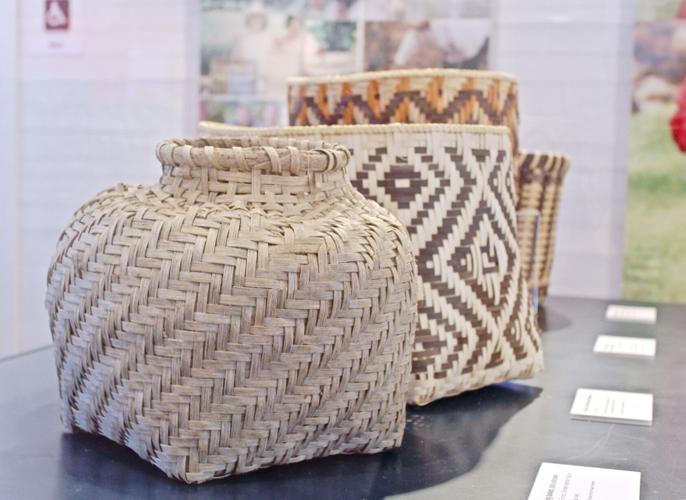 Several pieces are on display at the "Thelma Forrest: A Weaver’s Wisdom" exhibit.

Ben Karleskit, who lives "over by Inola," visited the Saline Courthouse Museum on Oct. 14 with his friends.

Several pieces are on display at the "Thelma Forrest: A Weaver’s Wisdom" exhibit.

ROSE, Oklahoma – A new exhibit at a rural museum in Northeastern Oklahoma brings basketry to life and tells the story of one women’s wish to be a lifelong student of weaving.

“Thelma Forrest: A Weaver’s Wisdom” features the work of Cherokee National Treasure Thelma Forrest, who was awarded her title for basketry in 1992. The display is running at the Saline Courthouse Museum in Rose.

“She has a vast knowledge of different patterns and techniques,” said Shade-Lainer.

Forrest is originally from Chewey, she said, and learned to make baskets from weavers to whom she was introduced from the rural Cherokee community of Kenwood.

“She learned more techniques and patterns from members of the Eastern Band of Cherokee Indians,” said Shade-Lainer. “She considers herself a lifelong student and wants to learn even more.”

Forrest weaves pieces with both flat and round reed, and several are available to view at the exhibit.

“Visitors will see 12 pieces on display. Most are done by Thelma and two are done by her granddaughters, Laney Culley and Kendall McCoy,” said Shade-Lainer. “It’s a family legacy in basketry.”

Museum cashier Chrystal Robbins said some of Forrest’s friends and family had come to see the exhibit.

“Usually every time we have basket makers, they’re all a bit different,” said Robbins. “They all have their own style.”

“We’ve been telling [our friends] how much we’ve enjoyed the exhibits here and how [the museum] is underutilized,” said Goertz.

Goertz said she remembers visiting the Saline Courthouse from the time she was a child, when it was a private residence.

“We try to come every time they change the exhibit,” she said.

As she viewed the Thelma Forrest exhibit, Goertz was especially intrigued by an “unusual” honeysuckle basket.

‘I’ve never seen a basket made of honeysuckle, but it makes sense,” she said. “I’m constantly having to cut this out of my fence so I know how resilient and pliable it is.”

“Thelma Forrest: A Weaver’s Wisdom” is open now through Jan. 7. The Saline Courthouse Museum in Rose is open Tuesday through Saturday from 10 a.m. to 4 p.m. with no cost for admittance.