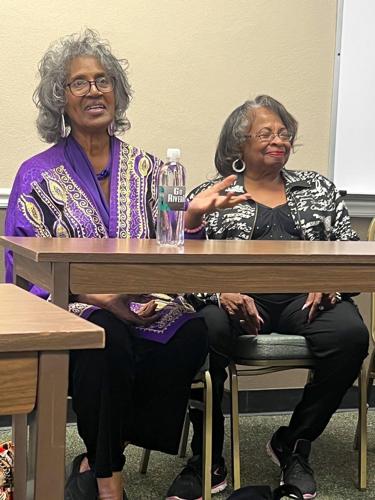 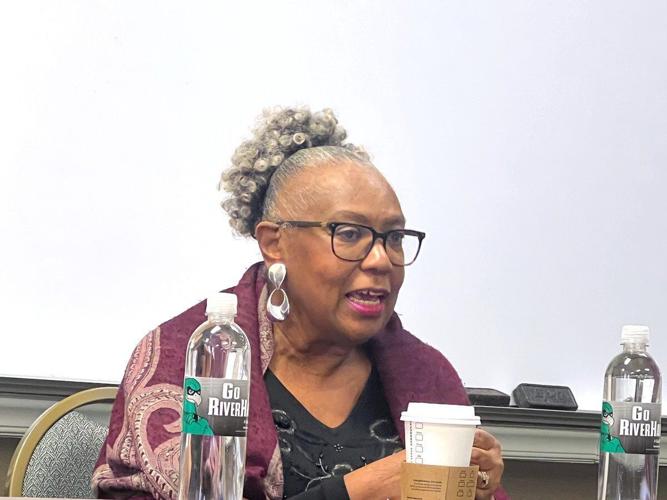 Joyce Jackson, a member of the Carla Luper Legacy Committee, introduces herself to Northeastern State University students and faculty members. 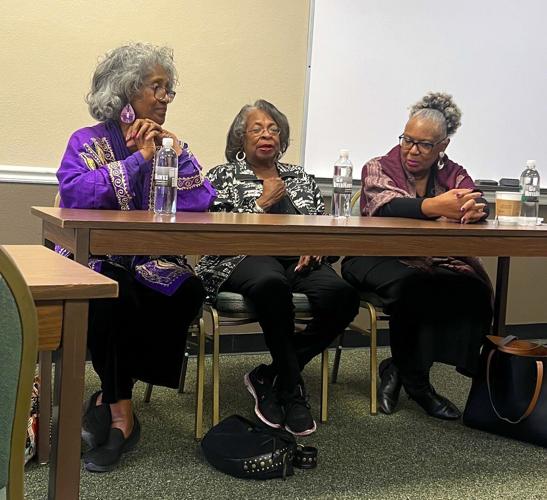 Members of the Clara Luper Legacy Committee discuss events they took part in during the civil rights movement. From left are: Joyce Jackson, Joyce Henderson, and Marilyn Luper Hildreth.

Joyce Jackson, a member of the Carla Luper Legacy Committee, introduces herself to Northeastern State University students and faculty members.

Members of the Clara Luper Legacy Committee discuss events they took part in during the civil rights movement. From left are: Joyce Jackson, Joyce Henderson, and Marilyn Luper Hildreth.

TAHLEQUAH, Oklahoma – The legacy of the woman who played a fundamental role in the nation's first 'sit-in' for civil rights lived on this week during a presentation on a university campus.

"We hope [attendees] received some history, and I'm hoping it will make them dig into the history so that they can understand what has happened in the past. It can help them understand what is going on now so they can help move us forward," said Henderson.

Civil rights activist Clara Luper was adviser to the Oklahoma City NAACP Youth Council and a history teacher at Dunjee High School when she led 13 of her students to the first recognized U.S. sit-in at Katz Drug Store in Oklahoma City on Aug. 19, 1958. Initially the group of Black students was refused service, and they were physically accosted by other patrons, though they remained passively seated.

The initial sit-in lasted three days before drugstore management agreed to serve the students. That event helped integrate this type of nonviolent protest into the civil rights movement.

Hildreth believes the reason her mother is not as well-known for her activism is because her story is not being shared.

"Until we in Oklahoma start telling the story, who else is going to tell it? Somebody out in Kansas? No. Texas? No. We have to be proud and tell our own story," said Hildreth.

The Clara Luper Legacy Committee has been keeping their namesake's memory alive through different acts, such as having a post office dedicated in her name; restoring the Board of Freedom Center, set to be finished in 2023; and working to create a plaza near the location of the original Katz Drug Store complete with statues of Luper and the original 13 students from the sit-in.

NSU Professor and Chair of History Iain Anderson said he already knew the story of Luper, but wanted to learn more about what the individuals at the sit-ins were feeling at the time and how they took the idea of a sit-in and turned it into an actual act.

"An event like this shows what it takes to make history," said Anderson.

NSU sophomores and event attendees Abby Baldwin and Erin Howell said they both learned several pieces of information they had never learned in a classroom.

"In many Oklahoma history classes, a lot of this stuff isn't covered, so we kind of have to cover it ourselves," said Howell. "I felt like it was really important to come here today, especially as a white person, and learn about what was done. With that knowledge we can take it and apply it to the future and see if we can stop it from happening again."

Baldwin said she had never heard of Clara Luper or her activities with the initial sit-ins.

Howell and Baldwin said sharing this type of history with others can be used to stop hatred and future bigotry from prevailing.

"These are real people. This was not that long ago," said Howell. "They are still alive and a lot of history tries to put the photos in black and white and tries to act like it was a long time ago. 'Oh, it's over now.' But no, it's still happening. These people are still alive and to see them right here - that's insane. They were there."