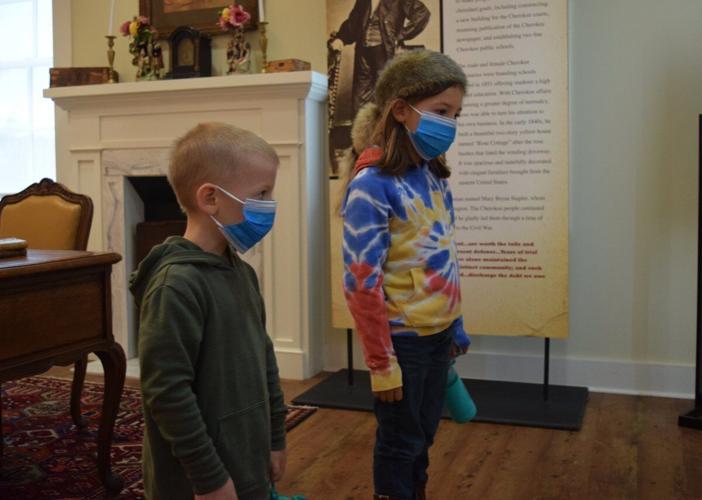 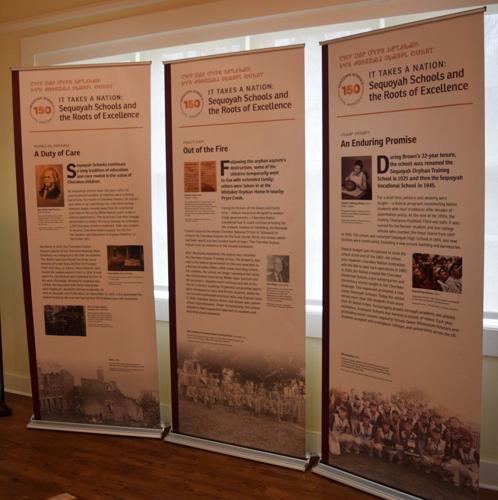 “It Takes a Nation: Sequoyah Schools and the Roots of Excellence” examines the history of Sequoyah Schools, starting with the Cherokee Orphan Asylum, which was established in March 1872.

“It Takes a Nation: Sequoyah Schools and the Roots of Excellence” examines the history of Sequoyah Schools, starting with the Cherokee Orphan Asylum, which was established in March 1872.

TAHLEQUAH, Oklahoma – A museum in Northeastern Oklahoma has opened a new exhibit inviting the public to learn more about the education system of the nation's largest Native tribe.

“It Takes a Nation: Sequoyah Schools and the Roots of Excellence” examines the history of the Cherokee Nation's Sequoyah Schools, starting with the Cherokee Orphan Asylum, which was established in March 1872. The new exhibit came about after school personnel submitted a request to commemorate the 150-year anniversary of its founding.

“Sequoyah Schools’ base and foundation started with the Cherokee Orphan Asylum and was created from an act passed in November of 1871, passed by the National Council and approved by the chief at the time,” said Karen Shade-Lanier, exhibit manager for Cherokee Nation Cultural Tourism.

The asylum was established following the American Civil War in 1865, which left many Cherokee children orphaned and homeless. At that point, Cherokees had established themselves in what is now Northeastern Oklahoma, following removals often called the Trail of Tears. They were reunited with Cherokees who had moved to this part of the country prior to the forced march.

“When the Civil War began in the 1860s, families split along Union and Confederate lines. You had families who fought for the North and South. It devastated families. Many Cherokees died from the fighting and starvation. They found themselves with an unprecedented number of orphaned children,” said Shade-Lanier.

Traditionally, Cherokees, who are matrilineal, relied on clan systems to take care of their children. According to Shade-Lanier, by the 1820s, Cherokees had already begun to move away from the clan system, and by the end of the Civil War, extended families were not equipped to take care of the number of orphans who required homes.

By 1872, the Cherokee Orphan Asylum welcomed 54 students. The building is no longer standing, having burned down many years ago.

The new site was constructed from a three-story mansion owned by the estate of Lewis Ross, brother of John Ross, then principal chief of Cherokee Nation.

“This home was expanded. They made improvements and opened it up to orphans in 1874. They expanded it by adding other wings on it as well. It attests to the need and numbers that we’re looking at,” said Shade-Lanier. “A census estimated 1,200 children were orphaned in the Civil War, but it is likely there were more than that.”

In 1903, a fire destroyed the mansion, and the orphans needed to find a new home. The event preceded Oklahoma statehood at a time when Cherokees were already feeling the effects of the Curtis Act of 1898 and allotment, which disbanded communal land and allowed the federal government to justify the seizure of Cherokee territory and property.

The orphans were moved to a site the Cherokee National Council had previously designated as the Cherokee Home for the Insane, Deaf, Dumb, and Blind. The residents were relocated, which made room for orphans. The site has undergone many transformations, but now stands on the parcel of land where Sequoyah High School is now located.

After Cherokee lands were absorbed by the State of Oklahoma, the orphanage was turned into an Indian boarding school.

“It was given to the Bureau of Indian Affairs, and they operated it like any Indian Boarding School in the nation. They took a military-style academy approach,” said Shade-Lanier.

By the 1980s, federal budget cuts threatened the school, so Cherokee Nation negotiated with the BIA and regained its operations in 1985.

“It’s been a success for Cherokee Nation. Now, it is Sequoyah Schools. Frequently, we have Gates Millennium Scholars. We have students who go all over the country to college. It is something to be proud of,” she said. “That made this exhibit appropriate for putting it at the John Ross Museum, which was also a school.”

Cherokee Nation Cultural Tourism created a separate identical exhibit and installed it at Sequoyah High School so students can learn about the history of the school. The exhibit is slated to be open until the end of the school year.

Justin Smith, who works at the John Ross Museum, is happy to see the new exhibit. He said people have the opportunity to learn about the early history of Sequoyah Schools, as well as the history of John Ross himself.

“The museum helps people to have somewhere to ask questions about John Ross. Not a lot of people are familiar with him. They know of him, but they don’t know about him, so this is a great place for people to come out and ask questions,” he said.

Funeral service for Rita Davis, 83, of Chickasha, was 1:00pm, Tuesday, May 17, 2022 at Southern Oaks Church of Christ. Interment was at Fairlawn Cemetery. She died May 12, 2022. Arrangements are with McRay Funeral Home.